For its latest line of T-shirts, Prada has found a notable way to differentiate itself: enlist the design help of world-class architects like Rem Koolhaas and Herzog & de Meuron. Well, sort of. Koolhaas and co. didn't really design the tees, but they did do the buildings whose floor plans and façades are silk-screened across them (Koolhaas' Soho Prada flagship, above left; Herzog & de Meuron's Tokyo flagship, above left). Hey, if you're going to wear a shirt emblazoned with the blueprints of a retail outlet, better one of Prada's boundary-pushing boutiques than your local Abercrombie & Fitch. 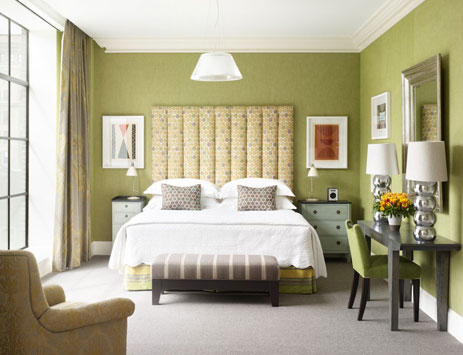 Break out the Platinum Card: The much-trumpeted, much-anticipated Crosby Street Hotel—the first U.S. property for London's Firmdale Hotels—opens October 1. (Hotel Chatter clues us in that the opening was pushed back from today, thanks to an electrical problem.) Its introductory offer: $495 a night. In the Crosby's favor: A good pedigree (owners Tim and Kit Kemp's London hotels, including the Haymarket and the Knightsbridge, are some of that city's finest); a great location (on Crosby between Prince and Spring); a tidal wave of buzz. Against it: $495 a night. What will that buy you? The usual amenities, of course—and then some. Let's take a look:

- Attention to detail, from the macro (40 different design schemes for 86 rooms) to the micro (the hotel logo re-created as a pattern on the staff's ties), says The Moment.


- Cohabitation with commissioned works of art, like hand-forged, 700-pound steel gates (says Curbed); a 10-foot-tall Jaume Plensa steel sculpture of a human head made from alphabet letters, in the lobby; and The Reconstruction of My Views, a short film by Jean Roman Seyfried chronicling the changing NYC landscape (and the building of the hotel).

- A (temporary) piece of Soho Ascendant. The hotel is part of the city's "new downtown," says Travel + Leisure —which, admittedly, has been new since the mid-eighties. But before that, Soho was all dark alleys, à la Scorsese's '85 leave-before-dark black comedy After Hours, shot in the neighborhood.

- A clean conscience. The hotel is aiming for Gold LEED certification.

- Aromatherapy. The hotel has its own scent, Le Jardin 10012 (its ZIP code), created by British perfumer Lyn Harris for its bath products and candles. This particular jardin smells of bergamot, rosemary, thyme, and cedar. 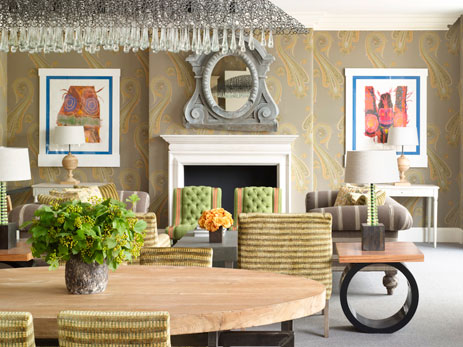 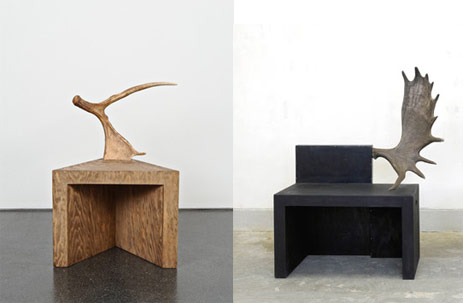 We're not sure when he finds time to do it—what with a men's line, a women's line, a fur line, and two diffusion lines—but somehow Rick Owens also designs furniture. And as a new London gallery show of his interior work makes clear, he's got plenty to fall back on if he ever decides this fashion thing's for the birds. Owens' pieces range from chairs and sofas to lamps and tables, using some of the same materials he's worked with in clothing (leather, suede, shearling, and fur) as well as plywood, marble, and a few natural products. More antlers? Well, we might've been a little weary of those in the past, but if anyone's capable of breathing new life into an overused design detail, our money's on this guy.
Through September at Sebastian+Barquet London, 19 Bruton Pl., London, 011-44-20-7495-8988, sebastianandbarquetlondon.com 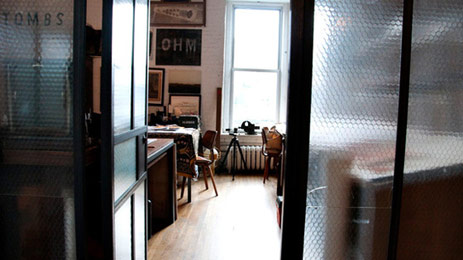 R. Kelly might've been talking about fashion week when he called out what was really important: "After the show, it's the after-party." And this fashion week, many of the best after-parties were at the Standard hotel. That's partly thanks to the services of Roman and Williams, the go-to interiors firm for building a hot spot. (They also worked on the Ace Hotel.) The folks at The Scout took a tour through the company's offices, which are stylish enough to host their own parties. That's maybe something the company ought to look into. We have a feeling that Kiki Dunst and co. will be holding the lock on the Standard for the foreseeable future, anyway. 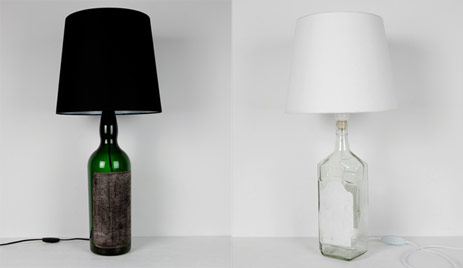 Margiela's oft-talked-about home collection, White Objects, is finally rolling out next month. (One guess as to the dominant color scheme.) As with many things Margiela, the pieces walk the fine line between awesome and head-scratching. In addition to the lamps (above, first spotted at the Milan Furniture Fair), there are also strange objets de décor that seem, to our surprise, downright useful. The embroidered cotton page calendar (below), for example, becomes a 12-piece napkin set when the year's over. Whether you ever bring them into contact with splatters or spills is up to you, but feel free to cross "napkins" off the January 2011 shopping list.
Available in October at Margiela stores worldwide; maisonmartinmargiela.com 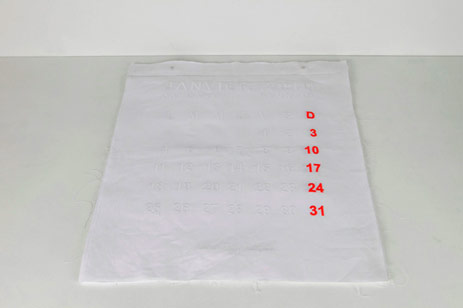 A new kind of "clean design" 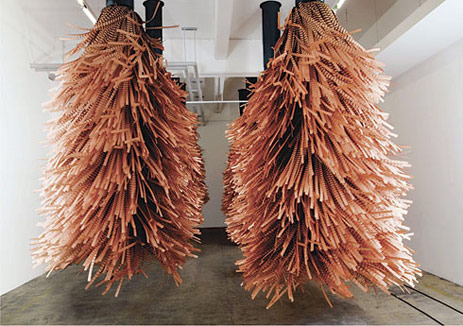 Three weeks after winning the Danish Arts Foundation prize for the odd staging of his Spring 2010 collection, The Solar Donkey Experiment Show, at Copenhagen Fashion Week—the line was shown on the darkened hills of Søndermarken Park to anyone who dared show up—Henrik Vibskov helped kick off Copenhagen Design Week by exhibiting a "car wash for humans" (pictured). Odd, you say? Maybe, but par for the course at CDW, where a confetti-throwing, double-jointed contortionist named Captain Frodo was featured in an exhibition of sustainable design, and an Index Award for "design to improve life" was presented to a book enumerating uses for parts of a dead pig (named, charmingly, "Pig 05409"). Two thoughts: A) Is it something in the water?; and B) Suddenly, showing your collection in a park doesn't really seem that unusual.
Copenhagen Design Week runs through Sunday; copenhagendesignweek.dk

The Windy City gets an aerodynamic new landmark 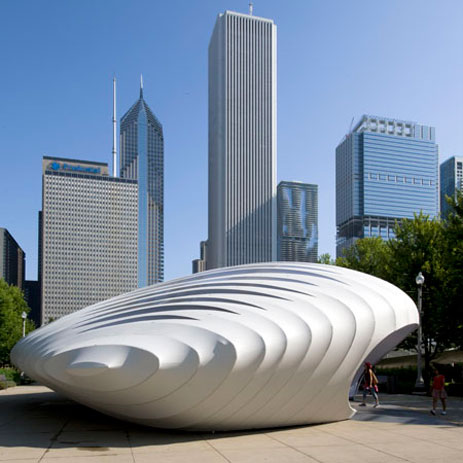 Keeping up with the career and projects of Pritzker-winner Zaha Hadid is a full-time job—every time you turn around, the lady's designing a shoe for Lacoste, an opera house in Dubai, or an office building in Warsaw. So we've mostly consigned the Hadidiana to the design bloggers of the world, those brave souls who've chosen to make such things their, well, full-time jobs. But every so often, a Hadid project demands notice from one and all, like the architect's newly opened Burnham Pavilion in Chicago. The bent-aluminum and fabric construction was erected in Millennium Park to pay tribute to the centenary of the Burnham Plan, which mapped out the blueprint for the Windy City in 1909. The interior walls are projected with video installations, but we prefer the outside, the better to see the organic forms' interaction with Chicago's famous skyline—which, no offense to the Poles, we'll take over Warsaw's. 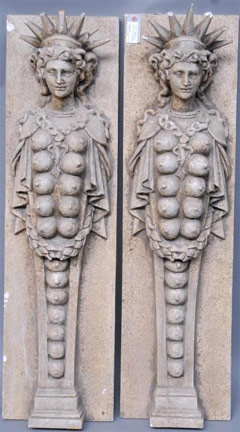 We're not sure if these 17-breasted decorative fireplace panels make us wish we had been invited to a party at Penthouse publisher Bob Guccione's Connecticut manse, or glad we weren't. They went on the block yesterday along with the Gooch's other tasteful, seized-by-creditors treasures. 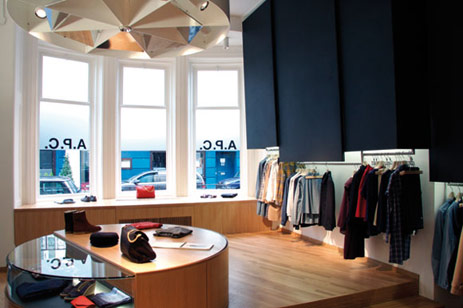 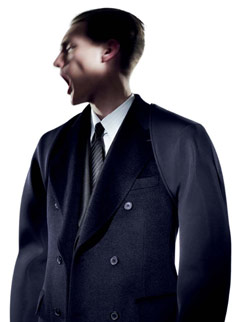