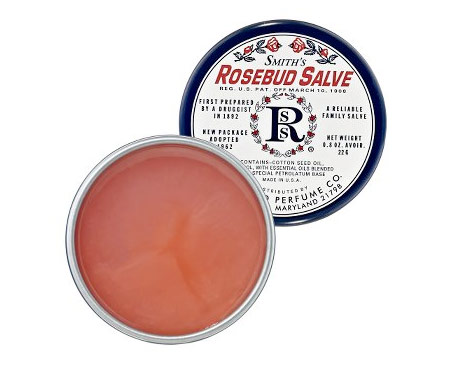 One guy's last word—my first. The air around here is starting to get chilly, and when a colleague asked what was the first thing I'd be buying for fall (well, aside from the Dries suit I picked up last month), I told him it was a no-brainer: lip balm. Specifically, Smith's Rosebud Salve. Sexy, it's not; but then, neither are bleeding, cracked lips. Okay, they're sort of bad-ass-looking after a bar fight (make that a bar fight you won), but otherwise it's just not a great look. Rosebud's been around for over a hundred years, and it's made of natural ingredients right here in the U.S.A. More importantly, the shit keeps the old kisser chap-free no matter how cold it gets outside. For years it flew under the radar, and I'll admit the indie snob in me was bummed to see it had been picked up by places like Urban Outfitters and Sephora a while back. But when you're talking about something this essential, I'll take accessibility over coolness any day.
$6 to $8, available at sephora.com and urbanoutfitters.com (note: Urban Outfitters stocks only the mint version; I prefer the original flavor) 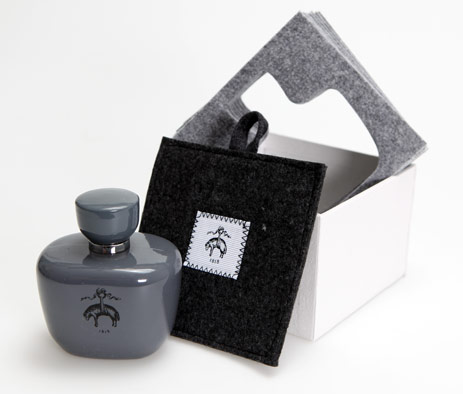 Brooks Brothers' new Black Fleece cologne, according to designer Thom Browne, is "evocative of that man sitting in a library or parlor, smoking and drinking whiskey." Why, these are a few of our favorite things! We put it to the test to see if it stacks up. The results: yes and no. Library? No. Smoking? No. Whiskey? No—there's bourbon mentioned in the parfumeur's précis, but it's bourbon pepper, which smells, as you might expect, a lot like pepper. If this Black Fleece man is drinking, he's sipping a vodka-and-grapefruit Greyhound: Sharp notes of the citrus fruit abound, with a not unwelcome edge of ginger.

And speaking of gray—hounds and otherwise—the package deserves special attention (above). The flacon comes tricked out in a box filled with die-cut gray felted-flannel textiles—a cool, creative touch, and a nod to both Browne's preferred fabric and Geoffrey Beene's landmark Grey Flannel fragrance. Beene's bottle, too, came swathed in the material.
$125, available at brooksbrothers.com

PLUS: While at Black Fleece, we also had a chance to preview Browne's Spring 2010 footwear for the line. No big surprises here—shoes like the double-soled wingtip brogue (below) are collection standards. But for Spring, the brogue got a tune-up in an appealing new cream color. 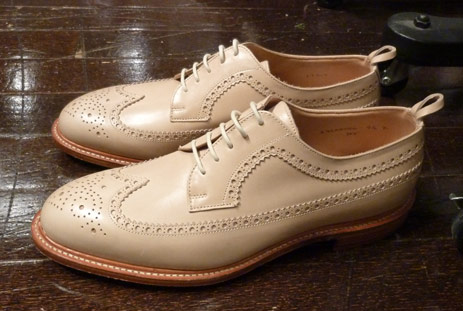 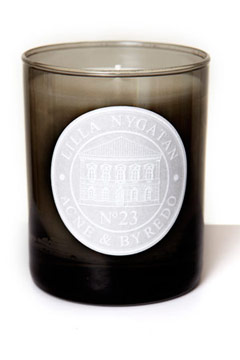 Back when we spoke to Byredo Parfums' Ben Gorham about his Fantastic Man cologne, he mentioned another collaboration in the works: a candle, with his fellow Swede, Acne creative director Jonny Johansson. Our sister site gives the heads-up that it's due for release this week. Good news if you want your place to smell like…an office building. As it turns out, the scent was inspired by the denim brand's new digs, a sixteenth-century bank building in the oldest part of Stockholm. That means cold stone, wood, and incense, as imagined by parfumeur Olivia Giacobetti. Pretty good for an office—and nary a hint of TPS report.
About $60, available Thursday at Acne Studio, 10 Greene St., NYC, (212) 625-2828, acnestudios.com, and afterward at Barneys New York; for locations, see barneys.com 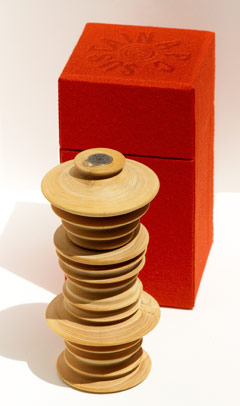 There's a reason that A.P.C. hasn't offered a scent before now: Owner Jean Touitou found the very idea "vulgar" and "gross." But after meeting a girl in L.A. who blends essential oils, the man found it in his heart to offer up Sustain, a combination of 12 oils in an odd but compelling wooden sculpture surrounding a glass bottle. (Think postmodern pepper mill and you're close.) We got our hands on the only tiny vial of the stuff in the city, and the predominant notes of patchouli and sandalwood seemed to hit the summer-into-fall mood perfectly. We didn't quite catch the smell of a guitar case lined in bright velvet and scattered with rose petals that was the apparent inspiration, but the unisex scent's moniker does pay a nominal tribute to rock—it's named for a guitar-effects pedal. And maybe also for its creator's new fixation: Touitou's former distaste is now an "obsession" bordering on "addiction." You've been warned.
About $260; limited edition of 300 units at A.P.C. stores and Colette starting Thursday; apc.fr 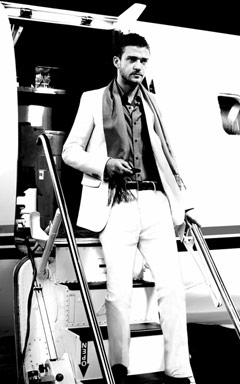 A scent called "Eau de Motherlover" doesn't exactly beg for a sniff. Good thing Givenchy's new scent, Play, endorsed and faced by Mr. Motherlover himself, Justin Timberlake, has hitched its wagon to JT the song-and-dance man, not JT the comedian. The packaging may be insistently music-focused—the bottle is shaped like an MP3 player—but the smell's a lot lighter than Timberlake's deep grooves...and that's the way he wants it. "I like a really fresh, clean scent," Timberlake said. (Yup, there are notes of bergamot, mandarin orange, grapefruit.) Any superstar tips on how to wear the stuff—say, something that might help you snag a Jessica Biel? "Out of the shower, brush the teeth, throw a little bit on," sayeth the pop sage/ladykiller. "Your swagger's already set in by the time you walk out the door." Well, our swagger might be an order of magnitude less than his, but still, it's good to know that even superstars remember the days when they made a mistake or two. "I would call my personal style 'unforced,'" he said. "But I've been in the public eye since I was 15. You can't look back at anything you wore as a teenager and think it was a good decision." Play, at least, should keep you safe from the judgments of posterity.
playgivenchy.com

Breaking: Odin to take over the world (of fragrance, at least) If the days of free spending are over, nobody passed the message on to Odin's Eddy Chai and Paul Birardi. While other retailers are bemoaning the latest consumer confidence report, these two are empire-building, with new addresses and product debuts slated for fall.


First, the musical chairs. Chai and Birardi are swapping spaces with Oliver Spencer, whose Greenwich Village shop will become a new Odin branch. Spencer will take over the single-brand Den in the East Village; Den will move to the expanding Odin flagship in Soho. Expect it all to go down in the first week of September—in other words, just in time for the New York fashion week crush.


Then, the debuts. Odin's first fragrances (Nomad, an oriental; Owari, a citrus; and Century, a woody chypre, pictured) bow in October. The notes may be abstruse enough to appeal to scent maniacs—"creamy heliotrope" here, "liquid myrrh" there—but the goal, says Birardi, is to bring the flavor of Odin to all. "From our perspective, scent is a great way to reach people, because it's sensory rather than, say, a shirt or something that may or may not fit." That last issue may be resolved with the coming of Edward, a competitively priced line of menswear essentials Chai and Birardi are designing with Duckie Brown's Steven Cox and Daniel Silver. Like the fragrances, the line will arrive at the stores in November and expand to other outlets for spring. Smells like conquest to us—or maybe that's just the creamy heliotrope. 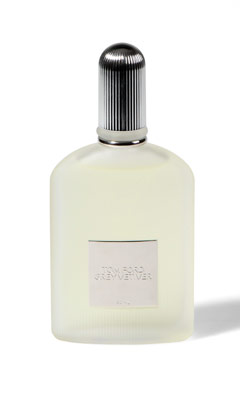 Tom Ford's latest latest fragrance for men, Grey Vetiver, is now hitting stores, and the brand was kind enough to send over a bottle to test. How's it smell? As you'd expect, like vetiver. (Cologne types know it well as an Indian grass, while the less-fresh masses may be more familiar with it as the name of a shaggy folk band occasionally joined by Devendra Banhart. As ought to be evident, it's the former in the mix here.) Says Ford: Vetiver is "the fragrance equivalent of the classic blue blazer, the beautiful watch, or the cap-toed shoe." The cologne is light and spicy, with additional notes of orris, nutmeg, and grapefruit. Pretty tame for a guy who compared a previous scent to "men's crotch."
$85, available next week at select Bloomingdale's locations, bloomingdales.com

Scent of a Man 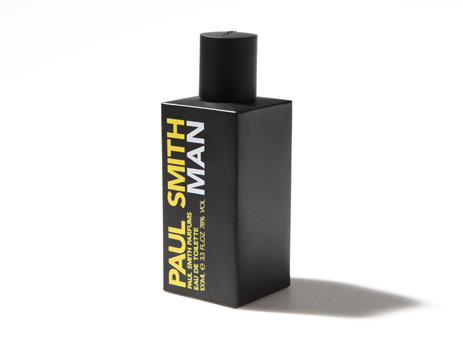 If there's one thing Sir Paul Smith isn't, it's reticent. Neither is his latest fragrance, Paul Smith Man. The new cologne, created by Nathalie Lorson, who's worked with Jil Sander and Trussardi as well as on earlier PS scents, is a strong mix of powdery orris, citrusy yuzu, and incense. It's heady stuff—here, as always, less is more—but fresh and appealing, too. As an added bonus, the bold, geometric bottle is as handsome as any we've seen lately, and well deserving of some prime shelf space. A bold look for a big scent—see: book, cover.
Paul Smith Man, 100 ml, $72, available August 6 at Paul Smith boutiques and online, paulsmith.co.uk 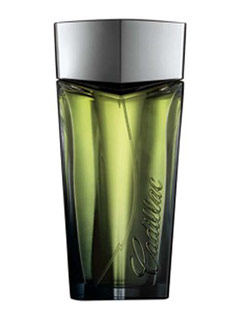 If one could bottle and sell the essence of Cadillac, what would it smell like? Notes of Cimarron and Coupe de Ville? A top note of fear over a base of smoke and long-ago glory? The iconic automaker is banking that an admixture of grapefruit, chamomile, geranium, tarragon, cinnamon, "sweet spice," and incense will do the trick. The Caddy fragrance will be sold in translucent green glass bottles that "pay tribute to the opulence and extravagance of past eras, as well as the luxury and ease of today." It's that last part that's tripping us up, given the recent bankruptcy of parent company GM and the overall unease of today's industry—but the fact that Cadillac is producing a scent at all is, given these circumstances, the smell of (relative) victory.
Cadillac, 100 ml eau de toilette, $73, available this fall 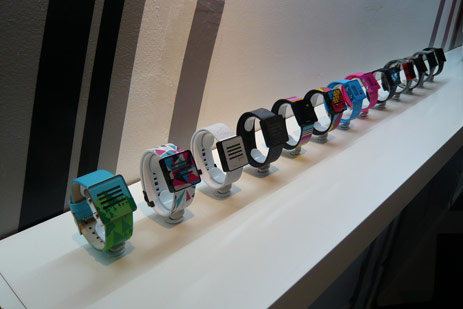 Now at Den: A full range of goods from Matthew Waldman's space-age accessories line, Nooka. That includes the watch range on which the line was built as well as several new products, from a card case (an Asset Organizer [AO], in the line's slightly 2001-ish vocabulary) to a polyurethane belt. Nooka's Day-Glo vision of the future can be a little bright, but its new namesake scent, available for the first time at Den, is a bit subtler. The cologne mixes notes of Japanese yuzu and pink pepper (along with steel and leather, apparently, for that space-shuttle touch), giving it a lightly spicy citrus tang.
Nooka eau de parfum, $80, available at Den New York, 330 E. 11th St., NYC, (212) 475-0079, and nooka.com 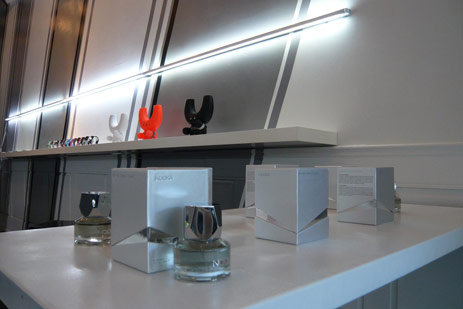