My Saturday with the Second Amendment 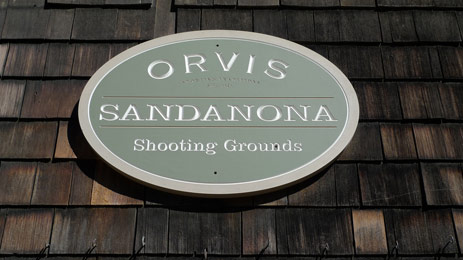 When Barbour invites you to test out their gear in its natural environment on the grounds of Orvis Sandanona, America's oldest permitted shooting club, you cancel your weekend brunch plans and go. At least that was my thinking. How could I resist experiencing the ultimate culmination of unabashed manliness? The facility offers fly fishing instruction, a shooting school, gun safety classes, and, of course, world-class courses for sporting clays. Sandanona was the perfect day trip from New York City to blow off steam from my 9-to-5 TPS-report-generating existence. For $75, you, too, can soak up the outdoors, bond with your fellow shooters, and try your hand at 100 clays. Spending time in the woods is fun, but for my money I want to be standing among the trees with five of my pals, each cloaked in English hunting jackets and toting loaded shotguns. Let's break down what makes the hunt for those pesky clay pigeons so much fun: 1. The activity is centered on discharging firearms; 2. Dog-friendly facilities mean man's best friend doesn't have to stay home; 3. When executed stylishly, sporting clays requires heavy doses of tweed, Barbour coats, and other waxed-canvas variants (plus all sorts of other gear); 4. No animals are harmed in the adventure; and 5. Did I mention guns? All in all, it was a day well spent. With a little Scotch (post-hunt, of course) and a steak, and my friends and I did our part to remove capital-M Man from the endangered species list.
Orvis Sandanona, 3047 Sharon Turnpike, Millbrook, N.Y., (845) 677-9701, orvis.com 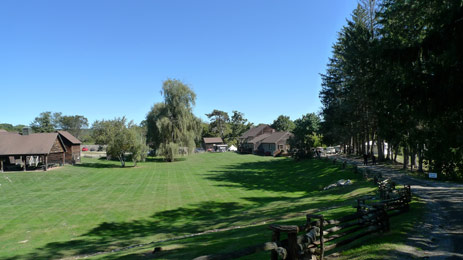 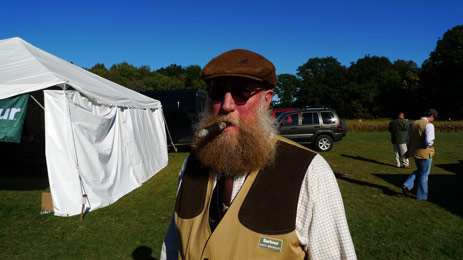 A new set of earbuds wants to stay in touch 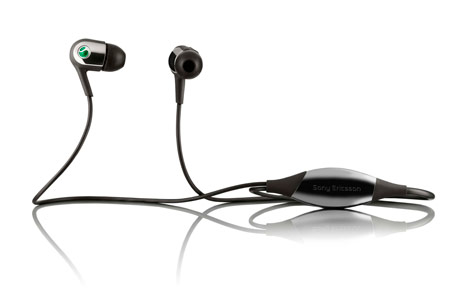 So maybe Sony Ericsson's new MH907 headset doesn't, as promised, change the way we listen to music forever. What the earbuds actually do, though, is impressive and intuitive enough: Put them in your ears, and your music starts playing; take them out, and the music stops. Got a phone call? Insert a bud in your ear to automatically answer the call, and just take it out to hang up. The downside: At least for now, they're only compatible with Sony Ericsson phones with Fast Port inputs, which means this particular party trick is the purview of SE users only. The upside: SE users, consider yourselves the life of the (tech-obsessive) party.
About $55, available worldwide later this week; sonyericsson.com 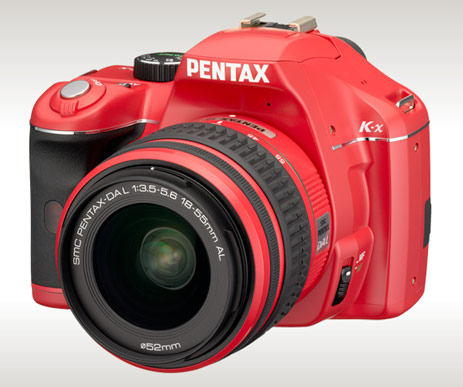 Pentax has been staking its market-share claim lately on a small range of feature-heavy, price-tag-light entry-level DSLRs—the company's K200d of a couple of years ago owned this category. The latest model, the K-x, steals a laundry list's worth of specs from the semipro K7 and has plenty of its own to bring to the party: Head over to Digital Photography Review to read all about those. But if you're just (browser) window-shopping—or feeling particularly patriotic—just know that the camera body comes in eye-catching red, white, or blue in addition to standard-issue photo black.
$650, available next month (or preorder now), pentaximaging.com 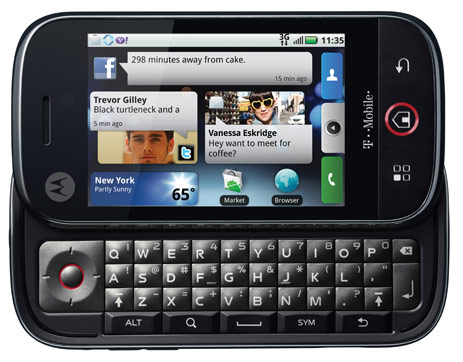 Motorola rolled out its first Android phone, the CLIQ, today. It's hardly the first Google-powered phone out of the gate, but obsessive social networkers (you know who you are) will find it well worth the wait. At the heart of the operations is MOTOBLUR—proprietary software that continually syncs and updates Twitter, Facebook, MySpace, Gmail, and other work and personal e-mails and provides update alerts to your full-touch home screen. On top of that, the 3G-and-Wi-Fi-capable phone's also loaded with other features: a slide-out QWERTY keyboard, 5MP autofocus camera with 24 fps video, MP3 player preloaded with Amazon's store app. Pretty good stuff, all in all—and total gravy if you're tweeting too fast and furious to even notice.
Price not announced; available later this fall with T-Mobile service; t-mobile.com

Much ado about something 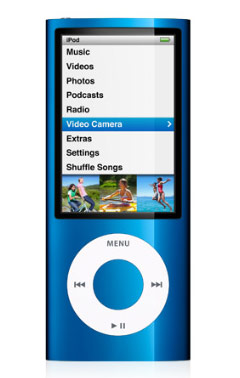 Apple's self-consciously epic "It's Only Rock and Roll" product rollout today was preceded by all the usual buildup, secrecy, and scattershot predictions from Cupertino-philes. The final shakedown, though, was more of a reality check. The rock 'n' roll revelations: a new version of iTunes (with better syncing, a better-organized iTunes store, and Facebook/Twitter-readiness); a larger (by 40 gigs) iPod Classic; bigger and cheaper iPod Touch models, cheaper iPod Shuffles, and—drumroll, please—new Nanos (left) with built-in pedometers, FM radio, and video cameras. We're of two minds about the whole thing: When playing keep-up with flip camcorders is the highlight of your presentation, that usually means somebody's jumped the aquatic predator. Then again, more features for less money means that everybody wins, doesn't it?
iPod Touch, $149 (8GB), and $179 (16GB); iPod Shuffle, $59 (2GB), $79 (4GB), and $99 (4GB Special Edition); iPod Touch, $199 (8GB), $299 (32GB), and $399 (64GB); 160GB iPod Classic, $249; new iTunes and iPhone software, free; apple.com

Having been the proud owner of four Leica digital cameras, I'm used to greeting the company's release announcements with a mixture of excitement and dread: New objets d'art from the Solms factory have a way of becoming bank-account-wrecking involuntary purchases. This morning's news of the M9 and the X1 appears to be no different.

The M9 (above left) provides a needed tweak to the landmark M8, with the more substantial assist of a massive 18 MP Kodak CCD sensor in the world's smallest full-frame digital system—meaning that for the first time, you can now use any Leica M series lens without distortion. The X1's more of a departure (above right). Leica was expected to trot out a shinier, happier Panasonic-partnered camera; what they did instead was offer up a true farm team for the digital M series with shutter-speed and aperture dials on top, an electronic menu much like those on Leica's digital Ms, and a 12.2 MP CMOS sensor almost ten times the size of the one in the D-Lux 4 (still, for the moment, otherwise known as "my camera"). Since the M9 carries a price tag more closely associated with statement chronographs, I'll be waiting nervously for the financing arrangements—sorry, I mean price—on the almost-M.
Leica M9, about $8,000, available now; X1 price to be announced shortly, available in January; us.leica-camera.com 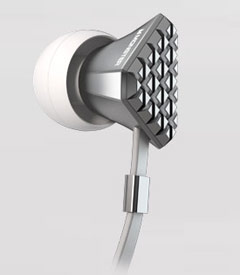 Okay, so you can listen to non-Spoon material, too. But in a twist of technological fate we must say we didn't see coming, dance-pop enigma Lady Gaga has partnered with Monster and Dr. Dre to release a line of geometric earbuds, as a follow-up to Dre's own Monster phones. The sound, to judge from Monster's previous cans, should be great; jury's out on the gridded, ultrageometric design. On one hand, it's timely and on-trend; on another, well, do you really want to make an earbud fashion statement? But it probably wouldn't be Lady Gaga if it weren't divisive, and we're happy to report and not endorse this particular accessory. The rest of the fashion world seems readier to give its assent to the Lady (who, for the record, occasionally claims to have a penis): She's playing a Givenchy-sponsored bash this Fashion Week, and is rumored to be singing at the Marc Jacobs after-party as well.
$99.99-$149.99, available in October; beatsbydre.com 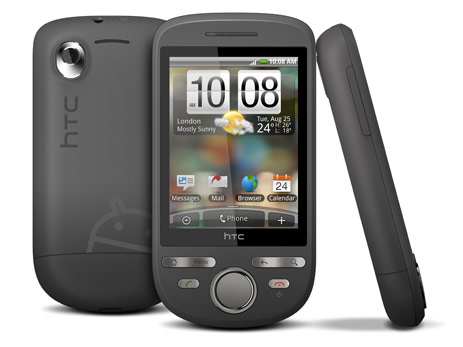 HTC's new Android-for-everybody smart phone, the Tattoo, is the company's second model (after the much-lauded Hero) to use the proprietary Sense UI, which is built around the rather vague concepts of customization and integration. This is a fancy way of saying you can customize the look of the thing and design your home screens to have exactly what you want up-and-running instantly and simultaneously—as long as "exactly" includes a 3.2 MP camera, MP3 player, GPS, Wi-Fi and Bluetooth capability, and Google Maps and Mail. If the feature set seems more covering-the-bases than home-run-hitting, HTC's hoping to make up the difference in the price: The Tattoo is being trumpeted as the company's entry-level Android, and with the feature-laden Hero going for less than $200 after rebate, we're wondering if they might be paying us to use this phone.
Price not yet announced, available later this year; htc.com

God is in the details, part CMXXIV 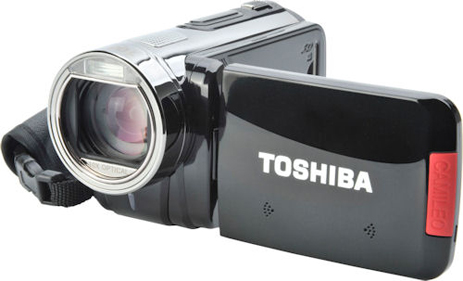 In a sea of digital camcorder uniformity, Toshiba has lit upon a clever—and elegantly simple—way to stand out. Call it the tech equivalent of a bright-red pair of socks. The line will be in stores later this year; head over to Engadget for the specs and whatnot. 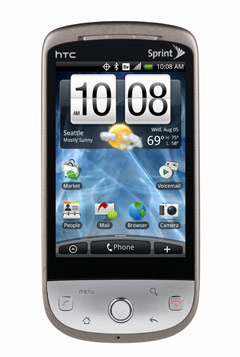 The HTC Hero sounded great when we first heard about it; now that Sprint is on the verge of rolling it out as their first Android to hit our shores, it sounds even better. The form factor's been rounded off a bit, and the feature set decked out nicely (HTC Sense is offered here for the first time and provides seven customizable home screens, for starters), though otherwise the 3G song remains much the same: 5 MP camera with video; accelerometer; visual voicemail; music player; and organizing, messaging, and e-mail functions, along with Wi-Fi and GPS. If those specs sound fairly standard-issue for a high-end, high-ticket cell phone, well, they are, except for one: the price.
$179.99 after $100 rebate; on sale October 11; pre-register at sprint.com/hero