Our award for the best Japanese avant-garde animated dolls goes to... 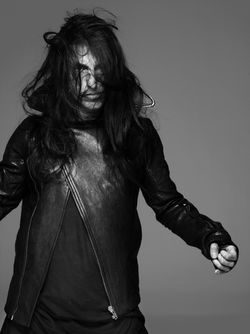 ...Undercover designer Jun Takahashi. (Who else?) GILApple, an animated short featuring Takahashi's homemade dolls, was one of several entries in last week's Shaded View on Fashion Film Festival, overseen by capital-F fashion blogger Diane Pernet. Popcorn flicks these flicks ain't, but where else could you see—in addition to the dolls—Steven Klein bloody up supermodel Lara Stone (in Fiction Noir) or the life of Rick Owens in 1:17 minutes (pictured, in Nick Knight's A Portrait of Rick Owens)? Owens himself dropped by the fest to present awards to the winning films, excerpts of which you can see over at DailyMotion. It should tide you over for outré arthouse—at least until Spider-Man 4. (And as for Takahashi, he officially went home empty-handed—GILApple screened out of competition.)

For its latest line of T-shirts, Prada has found a notable way to differentiate itself: enlist the design help of world-class architects like Rem Koolhaas and Herzog & de Meuron. Well, sort of. Koolhaas and co. didn't really design the tees, but they did do the buildings whose floor plans and façades are silk-screened across them (Koolhaas' Soho Prada flagship, above left; Herzog & de Meuron's Tokyo flagship, above left). Hey, if you're going to wear a shirt emblazoned with the blueprints of a retail outlet, better one of Prada's boundary-pushing boutiques than your local Abercrombie & Fitch.

What to wear with your blacked-out Rolex, Balmain tees, and Air Yeezys 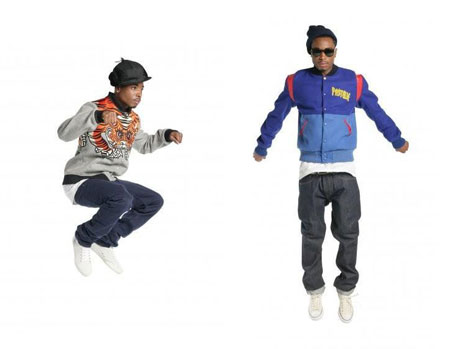 Good luck finding the clothes in stores now or anytime soon—debut date and even season are still heartily TBD—but Kanye West's first Pastelle lookbook shots have just hit the Web. (They're likely authentic; the man himself has worn some of the pieces pictured to his various concerts/awards shows/internships.) The next big things, per the West fashion forecast: more varsity jackets (nattily done in mixed leather and wool with metallic accents), bright colors, and, curiously, tigers. Check out the streetwear blog SwaggerDap for more. 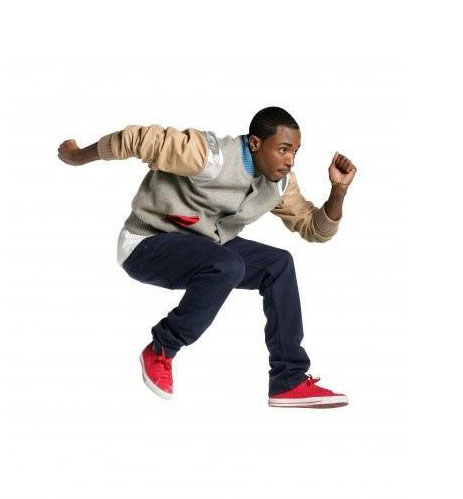 PLUS: Check out West's 10 Essentials. 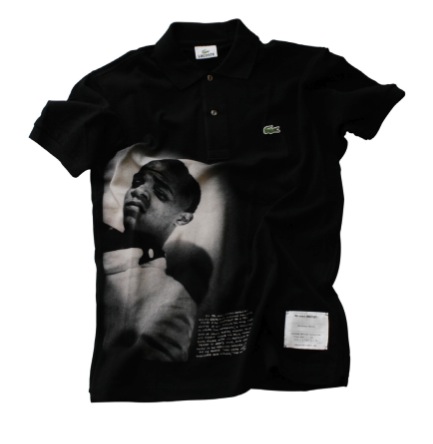 Creating the new "Jean-Michel Basquiat" line, which hits London's Dover Street Market tomorrow, was not exactly a simple process. The Inoue Brothers (whom you may know as the world's leading London-based, Japanese-Danish design team) started with polos, jackets, sweats, and shirts from iconic brands like Lacoste, Wrangler, Levi's, and Pendleton. Then, they worked with photographer Nicholas Taylor to print the various pieces with atmospheric, never-before-seen photographs of the late artist. Head over to High Snob to see the complete collection.
On sale tomorrow at Dover Street Market, 17-18 Dover St., London, doverstreetmarket.com 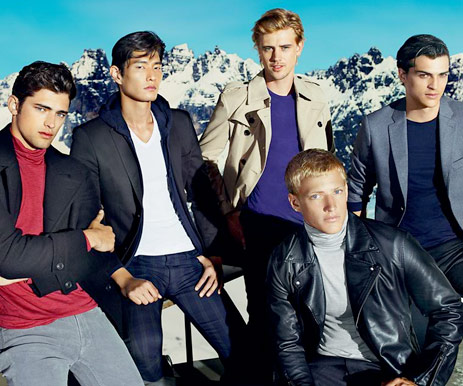 Now that the days are turning brisk, your ordinary undershirt won't cut it. Head for—where else?—Uniqlo, further cementing its all-things-for-all-people status with the new Heattech line. Heattech's technical fibers actually help generate and retain warmth by absorbing body moisture—its movement generates heat. (An antibacterial agent in the fabric helps control odor, too.) We can't explain the science of it, but we can report that we've taken it for a test run and the stuff does keep you toasty, so why ask why? It's only going to get colder, and these pieces will be welcome whether you're on the subway or, as Uniqlo's ads fancifully suggest, at the chalet. Best of all, unlike most of Uniqlo's garb, you can get Heattech items online—no fighting the Jil Sander +J crowds (though, admittedly, that kind of vigorous exercise would likely keep you pretty warm, too).
Tees, turtlenecks, and long johns, $10.50 to $15.50, available at uniqlo.com

This Just In: Vanishing Elephant at Oak What's in a name? In the case of Australia's Vanishing Elephant, not much. The year-old company's clothes are deceptively, appealingly simple. Until you take a closer look, that is. A waxed cotton anorak has shades of Penfield, except that it zips on the bias like a motorcycle jacket, adding a little toughness. A plaid button-down at first glance looks like everybody else's plaid button-down, until you notice the ribbon trim on the collar and chest pocket, a detail that punches up a classic without veering into flash.
Howard waxed anorak, $238, and Dale double-collared shirt, $168, available at oaknyc.com

Tags: Fashion, This Just In 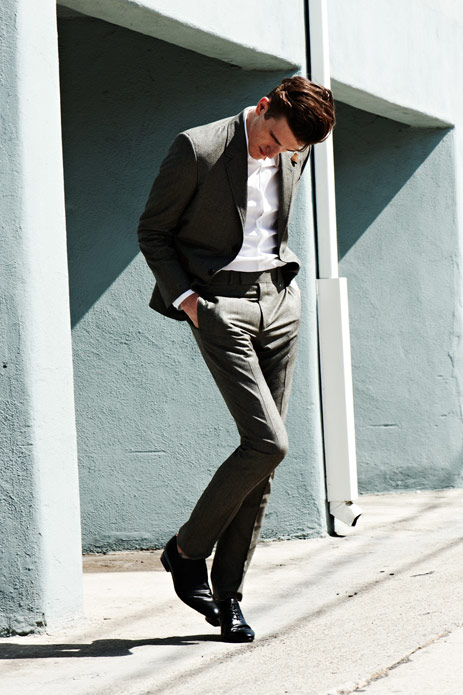 It was a long time coming—the news was announced back in August 2008—but Albert Hammond, Jr.'s suit line finally hits the racks at Confederacy today. Ilaria Urbinati, who co-owns the L.A. men's shop and worked with the sometime Stroke on the designs, calls the look "a good mix of old man, hunter, and seventies rock 'n' roll." It's not hard to see what she's getting at. The suits are tricked out with details galore (an oversize ticket pocket here, squared-off waistcoat there, suede trim wherever), all of which give the collection a vintage, slightly aristo air. And while there's a definite rock vibe, it's far from grungy—more gentleman troubadour (think Bryan Ferry) than woke-up-onstage frontman (we're not naming names). Clearly, the target customer is a guy who wears a suit because he wants to, not because he has to. That's certainly borne out by the color choices: Alongside gray and not-quite-navy are funkier options like hunter green, cream, and burgundy—although Hammond has already claimed one of those for himself. Since they've made only 44 suits in total, all you aspiring rocker-dandies have just 43 chances to do the same.

Click here for a slideshow of our favorite looks > 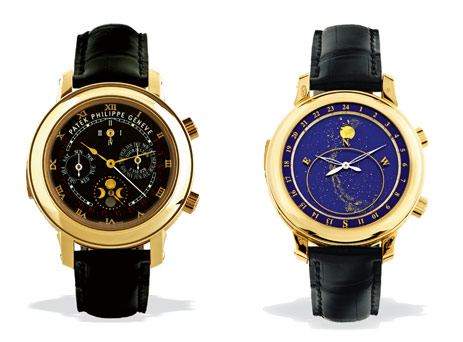 Horology buffs tend to go nuts for grand complications, so you should expect to see plenty of paper bags and Epsom salts at today's Patrizzi & Co. auction in New York. On offer: a Patek Philippe Sky Moon Tourbillon, the most complicated Patek ever (pictured above, front and back). Its estimated sale price: $1.1-$1.3 million, for which you get 12 complications, from cathedral gongs (developed with help from the metallurgists at the Swiss Federal Institute of Technology in Lausanne) to a celestial disc charting the sky and the visible stars of the Milky Way. Fortunately, there are a few more recession-friendly offerings available as well. Click for a few of our favorites in that (relatively affordable) category.

Shades to see the forest for the trees 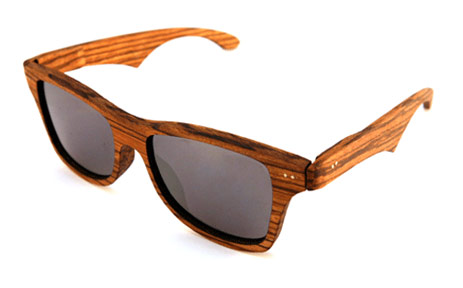 Sustainable this, organic that—it's all good karma, but it can make for some mediocre merch. Fortunately, that's not the case with the debut sunglasses from Portland-based Shwood. A riff on the durable Wayfarer shape, the frame is crafted from locally sourced hardwood, but the eco theme goes only so far. The lenses, which we suppose could've been made from scavenged Coke bottle bottoms or some such, are made by Zeiss in Italy.
From $95; for more information, visit shwoodshop.com Miuccia Prada may indulge the occasional "What is gender, anyway?" high jinks—say, the odd men's bikini or halter-style sweater—but her label's new initiative is all male and all business (or mostly business): made-to-measure shirting, debuting this week in New York, L.A., and San Francisco. Discerning guys can choose their cut (classic, slim, or pleated), collar (six different types), cuffs (five), extras from monograms to chest pockets, and fabrics from standard poplins to archival prints from recent collections. After all, when you're investing in a hearts-and-stars-print shirt (pictured, from Spring 2006), you want that sucker to fit just right.
$445 to $1,845; for more information, visit prada.com

PLUS: Know your Charvets from your Ascot Changs? Vote for your favorite on our shirtmakers hotlist.