< Gone Greek | Main | I Was On to Representative Joe Wilson >

This weekend our pal J.A. was up in our neck of the woods (literally), and he dropped by in a Tesla roadster that was lent to him by a friend who happens to be a stockholder in Tesla Motors. It just so happens that my country estate, Bumfields, is located in an area that is frequented by sports-car enthusiasts and motorcyclists because of its natural beauty and the curvy, well-engineered, and uncrowded roads. Fortunately these enthusiasts are usually driving Triumph TR3s, Austin Healeys, and vintage 911s, and not those vulgar late-model Lamborghinis and Ferraris that mark a dual excess of money and testosterone. The Tesla certainly stood out on our street, which mostly sees traffic in tractors, hay wagons, Volvos, Priuses, and Subaru Outbacks.

Yes, this deep blue, low-slung car—which resembles the Lotus Elise it shares some parts with—would have turned a lot of heads in the neighborhood except that it doesn’t make any noise. It sneaks up to you, at high speed, which I appreciate since everyone in my neighborhood is always waving at me to slow down.

When the Tesla first appeared this year my interest was piqued. For one thing I have long been fascinated by the maverick genius Nikola Tesla, the inventor who pioneered commercial electricity and who seems to hold the world record for being ahead of one’s time. Although Edison got the credit and the money for electricity, Tesla was in fact the creator of the alternating current, and the electric motor. 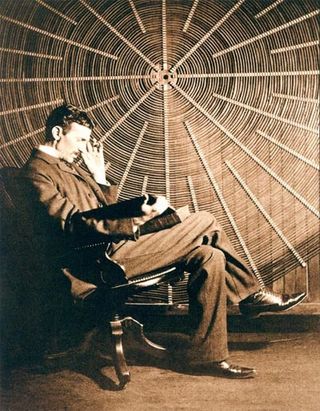 Much of Tesla’s work was hindered because of his eccentricity, his foreign origin and contacts, and his rather bohemian lifestyle. (He lived at the Waldorf Astoria and hung out with Mark Twain.) He was also not modest about his genius and how he had figured it all out and was going to revolutionize the world. Which he did, though not quite as grandly as he expected. Tesla was perhaps the greatest genius of his time, but his PR was terrible, and despite his amazing accomplishments he suffered from characterization as a “mad scientist”of the sort that later ruined Wilhelm Reich. But his discoveries contributed to the development of radio, radar, x-rays, lasers, and radio astronomy. And in a way, to this incredible car.

I wasn’t up on just how spectacular an achievement this plug-in car is. I have driven a Prius hybrid but this is a whole other creature. This machine has no engine, just an electrical motor, although it looks like a traditional rich man’s toy. I expected it to be peppy, but I was not prepared for the actual experience. After climbing into the cockpit, and it is a cockpit, I had to be tutored in how to start it. Mainly because it makes no noise except for the hum from the battery, which was audible at the same level while it was parked. It was eerie backing out the driveway silently, but that was nothing compared to stepping on the….no, not the gas, the accelerator. My God! The Tesla Roadster Sport is a rocketship. Or maybe a UFO is a better comparison. This car does 0 to 60 in 3.7 seconds. I did it myself. Silently! A full second faster than a Porsche 911, a tenth of a second faster than the quarter-million-dollar Ferrari F430. That’s remarkable enough, but the way it feels is astonishing. It hugs the road like a go-kart. This is by far the best-handling car I have ever driven, I guess in part because Lotus, the British manufacturers of the world’s best-handling cars, collaborated on the Tesla Roadster. The tires are super sticky and the considerable weight of the battery is perfectly balanced. I don’t know how close I came to flying off the road into a tree, but it never felt like I was close.

The most alien thing about driving a Tesla, aside from the eerie quiet, is that you don’t feel any shifting. This is an automatic, two-speed transmission. The tach goes up to a 14,000 rpm redline. With electric you get all the torque, all the time. Forget shifting. Floor this and you’re not in Kansas anymore. Flying around corners with just the sound of the wind, it was like being on the world’s fastest sailboat. Maybe they should sell a CD of high-revving gas engines for drivers having a tough time making the transition to quiet. 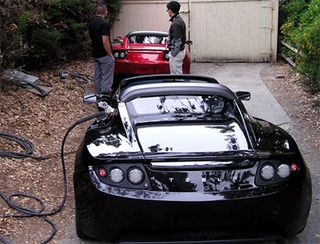 I was sold. This is the ultimate adult toy. It outperforms all those gas-guzzling cars that are the opposite of green, so nobody can knock you for it. Of course there are negatives. Like no room for the kid and the dog. Like maybe room for one set of golf clubs. So now I'm thinking maybe the answer is the Tesla S, the sedan that is due in 2011. The sedan will start at $49,900, including a $7,500 Federal tax credit, compared to over $100,000 for the Roadster, and it will be sold with battery-pack options, starting at 165 and going up to 300 miles. 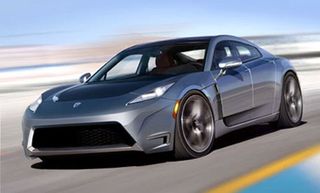 The Tesla S looks a bit like a Maserati, and although it's not as fast as the Roadster, apparently it will keep up with the pricier German sedans. At half the price of the S550 I'm driving now, this car will apparently turn in a half-second faster, 0 to 60 time. And I'm told you can pack even more groceries into it. I'm thinking of putting my deposit down quite soon. I think Nikola T. would heartily approve.