< Drinking (Again) for Health | Main | Are You Ready for the Country? >

Dash Snow is dead. The great Dash is gone. 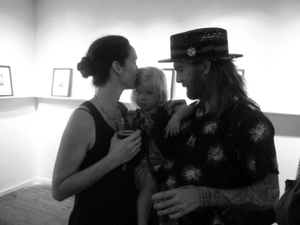 I heard about it yesterday, when one of his best friends suddenly burst into tears and ran from the room. All I heard was the word "Dash," but I knew what had happened. Dash was a rope-walker by nature. He was an artist working up high, and the gravity got him. He'd fallen. I was surprised and stunned and saddened, but not shocked. He worked without a net. And with a high degree of difficulty.

Dash was a beautiful person and a genuine artist. A lot of people didn't get the genuine part because to them he was a gossip star, all image. But he was the real thing, and sometimes his real was so in your face that people thought it must have been an act. It was an act, of course, but it was a real act. When you live in a world that's inside a television there are no other options. But Dash and some of his friends were re-inventing what it is to be an artist, because that's something every generation has to do. They had gotten the lay of the land and were responding accordingly. 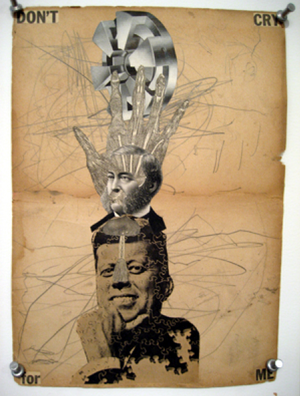 I was delighted to meet Dash, because when people would ask me what young artists I liked I was embarrassed to name people who were forty. But some of these youngsters seemed to have something going on, like Nate Lowman and Ryan McGinley and Dan Colen…but none of them more so than Dash.

I thought of the little artist's book sitting in my living room that he had given me: "In the Event of My Disappearance." It turned out Dash had OD'd at the Lafayette House. Everybody said he'd been clean, clear, in good health. That's the way it goes. The day before Jean-Michel Basquiat died, he'd left a message on my machine—he was back from Hawaii, clean, and feeling great. A clean junkie lives with danger. The equation has changed. Ask Lenny Bruce.

After living through purgatory these brave boys were conned by junk. One more time. I'm sad but pissed off, again. I'm pissed off when I read the stupid blogs and comments. The worst thing about an artist dying is that he can't talk back. Dash can't say "Fuck you!" back, so I hope his friends say it for him. And to all of the glib fuckers who say he was not a good artist, let me just say: Fuck you, what do you know?

"In the Event of My Disappearance." I always thought that book, and quite a bit of Dash's work, was meant to foreshadow a dramatic demise that actually might not occur. It needn't have occurred. We all do a lot of foreshadowing during our youthful drama phase, but sometimes we wise up a bit. That's punk rock. Sid got dead; Johnny got smart.

I remember the first artist in New York I became friends with who I considered really old: Lil Picard, who had been one of the surrealists, and who impersonated Andy Warhol's mother in David Bailey's documentary on him. She must have been in her seventies when I met her in the seventies, my grandpa's age, and she said to me, "Every artist has to go through his drug crucifixion period." I was younger than Dash when she said that, but it stuck with me and I saw it again and again. 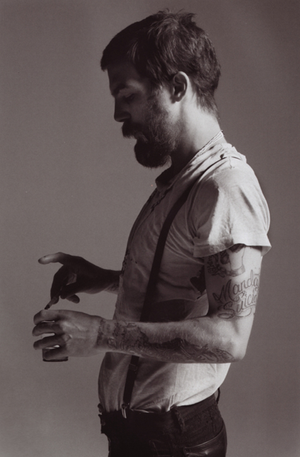 The way Lil said it was so non-judgmental. It was like being told the facts of life, the ones your parents didn't know. Dash could have lived but death was one of his subject matters. Death and life.

Dash was good at life. He was lively. But he was one of those artists whose work was a process of self-testing, a documentation of his life.

Page two of "In the Event of My Disappearance:" A bag of heroin on a black background. Page three, a Hitler-head postage stamp. Page nine, words cut from a newspaper: "STOP SUFFERING." Page ten, a Polaroid of an empty, ruined swimming pool. Page fifteen, Michael Jackson in a bandana, with two of his children, in Spider-Man masks. Lots of beds, tattoos, beer, parties, clips from magazines, strange things found in streets and fields, and finally a newspaper clip: "Bandit downs self to end chase." And a Polaroid of a railroad track in the middle of nowhere, curving into the trees.

I called my friend Olivier in Paris. He knew, and he asked me why Dash would have been in the bathtub. I didn't know. Jim Morrison died in a bathtub, but that's a long story with lots of footnotes. And plenty of overdoses ended in a tub of cold water, as friends tried to revive a blue person, but no, Oliver said, Dash had been alone, door locked from the inside.

Dash Snow was a beautiful man. He was as much of a character as he looked. He looked like he worked on the Pequod and was in port for a laugh before going out after another white whale. With his hair and beard and tattoos and hats he looked like he'd walked out of the past, or maybe a more interesting future, and he certainly made a point of being out of time. He had a grace and nobility about him that was definitely not of our time. Maybe he was the most modern of us because he was so in revolt against the here and now. He was not available by telephone. He was not available. He made himself independent by excluding himself from the communications loop. He didn't want to be in that automatic conspiracy. He saw you when he wanted to, or let you contact him when and how he wanted. Which means he saw what was wrong with the here and now, as an artist should. 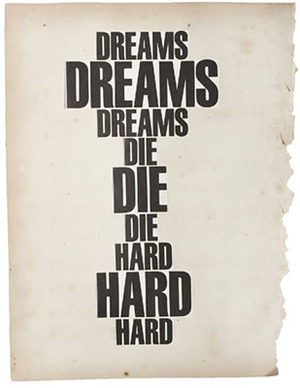 No matter what the morons write, Dash was a hell of an artist. He was young but he was really, really good. I was at Christopher Wool's studio one day and I saw something hanging on the wall and said, "Wow, what's that?" and he said "Dash Snow. We did a trade." If Christopher does a trade with you then you're good. I hadn't seen a collage like that of his. He was getting mastery of his media. He was going to be a great one.

Too bad about the publicity. The first thing I saw on the Internet was "Warhol's Child Dies." At first I wondered what the hell that meant. I had forgotten the New York magazine cover story, "Warhol's Children," which had made Dash, Dan Colen, and Ryan McGinley into the next art movement—one apparently based on partying, self-indulgence, and decadence. They had let this writer, Ariel Levy, into their world and the writer had written it from the writer's point of view. Sensationalism! But, to be fair, it was considered sensationalism. What a surprise. The day after it came out I ran into Dash on his bike. He was mortified. I can't imagine what he expected. Sometimes not having a phone isn't enough. How could he have not known what would happen? What would be written. What people would say. 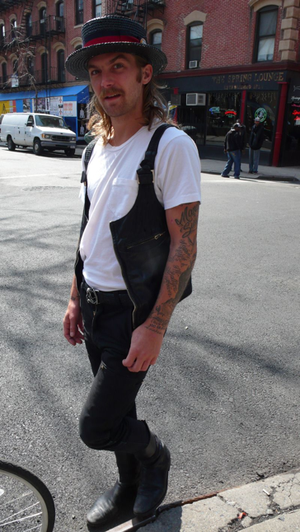 It's a vicious circle. Artists have to be famous to work. Unless they are rich. Dash wasn't rich. He was penniless from a rich family, which is sort of the worst of both worlds. He was serious, but the readers and those to whom he was just a name, they wouldn't take him seriously. Which is why the work is important. The work is still alive.

But the dashing Dash raced to the finish. The thing is that he didn't know where that was. I guess you never do until you get there.

Yesterday afternoon the news was still percolating in my head. I looked for more information on the web and saw all these stupid comments about Dash joining "the 27 Club." I had been through all of this before with J-M.B. They couldn't wait to make him into Jimi Hendrix and Charlie Parker.

A song sort of started going around in my head. I hadn't played it in a long time, but I could still hear it—that oddball non-singer's voice chanting: "Junk is no good baby…no good baby is junk…no junk baby is good…good junk is no baby….no good no good no good."

That was a song recorded by a great Beat legend, the artist and writer Brion Gysin, in 1982 when he was 66. "Junk is no good baby…" It was going through my head. 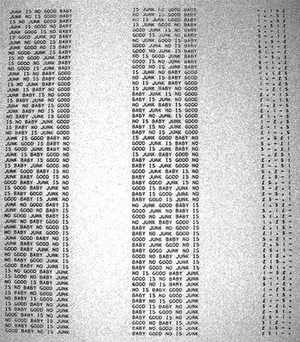 Brion knew what he was talking about. He'd been there, done that. That's why he performed "Junk is No Good Baby." He put it out as a single, produced by a young Frenchman named Ramuncho Matta, and then it came out on a CD along with other songs like "Kick That Habit." I met Gysin in Paris around that time. I remember his spectacular cough. He practically turned blue smoking a cigarette while we sat in Privilege in Paris, under Le Palace, and when he regained his breath he patted me on the knee and said, "My dear boy! I believed that I had breathed my last."

But Brion didn't breathe his last until 1986, when he died of lung cancer. Before he did he recorded a song called "Quit Smoking" that featured him coughing cancerously. It's horrible and it's fun. "Stop smokin' your joking….I'm chokin'….I'm croakin." It was released six years after he died. 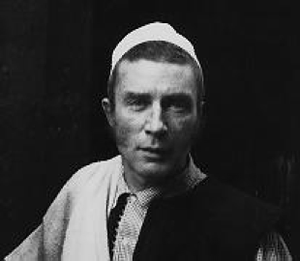 Gysin was an inspiration to William Burroughs. He invented the Dream Machine, which he, Burroughs, and others used as an oracle, a non-pharmaceutical means of consciousness alteration, and he devised the famous cut-up technique that was such an important method for Burroughs in such works as Naked Lunch. Brion was a great and amazing painter, whose work has not yet been properly assessed, but for him life was more important than work, and to be in his presence was a joy. He said, "I enjoy inventing things out of fun. After all, life is a game, not a career."

That's what the kids ought to know. It's not written. 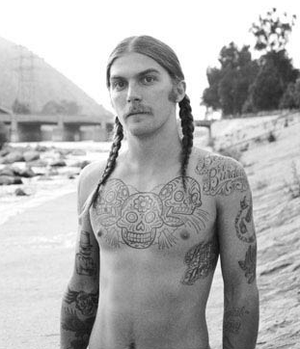