Are You Ready for the Country?

I live in the country. Part-time. I have a house in Northwestern Connecticut. It's the country alright, 22 acres, a lot of it woods. Tomatoes, strawberries, fennel, rosemary, basil, and stuff growing out back. Mint juleps growing out front. Had a big bear run through the backyard last year, found six wild turkeys on the back porch one day, and we've got hawks, buzzards, flying squirrels, deer, bobcats, snakes, turtles, salamanders, and insects that look right out of science fiction. I thought I saw Mothra one night.

I've got a shotgun but I might not have any shells. And one night I did see a mountain lion running down the road. The state pretends they aren't here because then they'd have a habitat or something, but this is wild in the country, baby. Don't leave the dog out. But it's also farm country. There are cows grazing right across the street. My neighbors raise cattle and geese and the chief executive of our town has a farmstand up the road where lately he's got organic potatoes, onions, garlic, zucchini, raspberries, and various exotic forms of salad. The corn and heirloom tomatoes aren't far off. Hey, I know urbanity is my beat, but I'm more country than you'd think. I've got a pair of overalls!

Here are some of my trees: 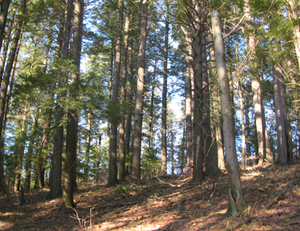 I've been spending a lot of time in the country lately, and suddenly I had a craving for country music. As a longtime New Yorker it might seem funny listening to country music, and I find most of that Nashville stuff horrible, but I have had a weakness for country for a long time. They do it right in Texas. Some people call it outlaw country. I call it urbane country music. I think I picked up the habit in Chicago. I used to go to an Irish pub called O'Rourke's and they had a lot of Waylon Jennings and Willie Nelson on the jukebox. I just fell in love with their voices and their poetics. How many nights did I stick in a quarter and pick, "Good Hearted Woman." She's a good hearted woman in love with a good timin' man. And it was in O'Rourke's over a pint of Guinness that I learned the lyrics of "Luckenbach, Texas" by heart. 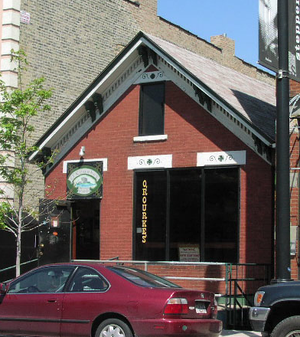 City people love country music; and it's big in Irish bars because Irish people love country music, too. Ireland is a country with a lot of country. It's really green, and they like American country music because it comes from Irish music, especially bluegrass; but they also relate to the poetry of country music, and such themes as drinking, infidelity, betrayal, heartache, all the good stuff. The fact is that a lot of what we call country music is just as much city music, and the truth is most of those country cats love the city. One of the most spectacular apartments I've been to in New York is Jimmy Buffett's penthouse. It's so high up you feel like you're in a plane. And the time I met one of my favorites, Jerry Jeff Walker, it was in the very fancy apartment of Dan Jenkins, one of our greatest country-and-western novelists. (Was that on Park Avenue?)

I love that outlaw country—Waylon Jennings, Willie Nelson, Johnny Cash, Kris Kristofferson, Merle Haggard. Hey, I had "Okie From Muskogee" stuck in my head for three days. Merle was just funnin' us, fellas. I'm sure he smoked marijuana in Muskogee. And of course, you cannot beat Hank Williams. If you have never really listened to Hank Williams you have never heard the greatest white blues ever. Eric Clapton doing Freddy King is fine with me, but Hank Williams is the real deal. I suggest that you immediately go to iTunes and grab on to "Ramblin' Man," a song that gives me the chills every time I hear it. It's the razor's edge of a high, lonesome sound that has as much soul as anything called soul music.

When we think of poetry in American music we think of Bob Dylan and Leonard Cohen (I know he's Canadian, I mean North American music) and Tom Waits, etc., or of the great tunesmiths of tin pan alley like Cole Porter, Jerome Kern, Johnny Mercer, or Irving Berlin; but some of the greatest poetry in American music comes from the country tradition. Waylon Jennings's "Drinkin' and Dreamin'" is the great lyric poem of the disappointed American blue-collar man of the rust belt: All I got is a job I don't like…and a woman that don't understand…so tonight at the bar I'll get in my car and take off from the promised land…drinkin' and dreamin' knowing well I can't go…I'll never see Texas, L.A. or old Mexico…but here at this table I'm able to leave it behind…drink till I'm dreaming a thousand miles out of my mind. Or the beautifully simple irony of the refrain of Waylon's "I've Always Been Crazy:" I've always been crazy but it's kept me from goin' insane. Or the powerful poignancy of Johnny Cash's "Jim I Wore a Tie Today," as he sings to a deceased friend at his funeral, Jim, I wore a tie today…the first one I ever wore and you'd have said I looked like a dummy out of a dry goods store.

Anyway, here's a little playlist of what I consider essential "country music," without which you haven't been exposed to the full spectrum of American culture. 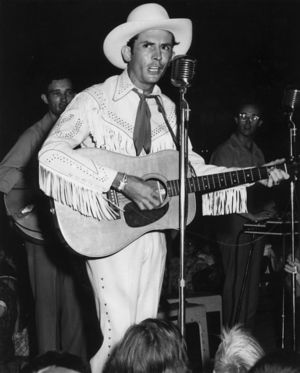 Hank Williams: Your Cheatin' Heart; You Win Again; Why Don't You Love Me Like You Used to Do?; Move It On Over; I'm So Lonesome I Could Cry; Honky Tonkin'; Hey Good Lookin'; Honky Tonk Blues; Cold Cold Heart 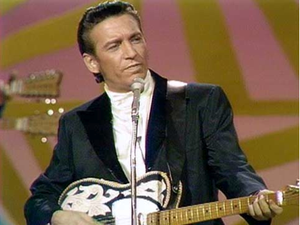 Willie Nelson: Crazy, Good Times; Always On My Mind, On the Road Again, Blue Eyes Cryin' In the Rain, Mammas Don't Let Your Babies Grow Up to be Cowboys; Hello Walls; Cowboys Are Frequently Secretly Fond of Each Other

Johnny Cash: Ring of Fire; The Man in Black; Hurt; I Walk the Line; Solitary Man; Rusty Cage; One; Folsom Prison Blues; Sunday Mornin' Comin' Down; The Beast in Me; Delia's Gone; Thirteen; Jim, I Wore a Tie Today 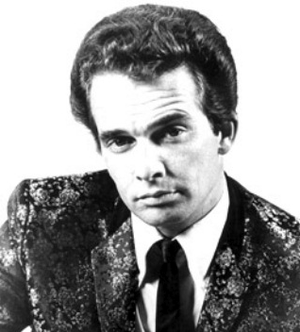 Merle Haggard: The Bottle Let Me Down; I Think I'll Just Stay Here and Drink; Mama Tried; Things Aren't Funny Anymore; The Fightin' Side of Me; If We Make It Through December; Living With the Shades Pulled Down; Big City 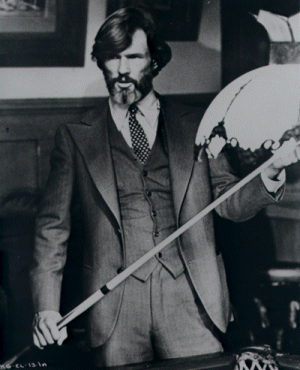 Kris Kristofferson: Sunday Mornin' Comin' Down; Help Me Make It Through the Night; The Silver Tongued Devil and I; The Best of All Possible Worlds; For the Good Times

David Allan Coe: Take This Job and Shove It

Billy Swan: I Can Help

Ray Price: For the Good Times; Heartaches by the Number; I Can't Go Home Like this; Release Me; Weary Blues 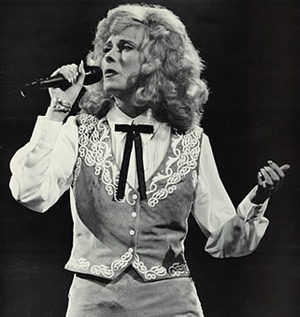 Listening to classic country music is good for you. It takes your mind off your troubles because it reassures you that somebody's got it worse, and it definitely distracts you from the contemplation of fashion, gossip, and luxury goods. And country music, at its best, carries with it a sort of immunity to the cultural ideas of "alternative" and "progressive" that have infected other genres with market-driven modernism. I don't need to know who the next Amy Winehouse is as long as we've got Tammy Wynette. Which reminds me of the time I interviewed the great Tammy Wynette. I think it was at the Plaza Hotel. She fit right in at the Plaza. She was as cool a customer and as a hot a woman as I've ever met. Sexy. If you don't believe me, ask Burt Reynolds. I came so close to asking her out, even though she was five years older than me.

Ironically I don't think that an American can be truly urbane without appreciating the musical tradition of this country, from rhythm and blues to bluegrass, jazz, and country. The pinnacle of urbanity in country music is probably somewhere in the neighborhood of one of my favorite acquaintances, Ned Sublette, a cowboy musician who came of age in the New York New Wave Scene, but who wrote "Cowboys are Frequently Secretly Fond of Each Other," which became a hit for Willie Nelson and was written long before Brokeback Mountain. Ned is not only a country cat but he's a black belt in salsa, and his extraordinary album Cowboy Rhumba brilliantly reveals the secret powerful connection between country and the Caribbean, just as Gangstagrass (written about here recently) shows the alarming magnetism between hip-hop and bluegrass. Anyway, on Friday I'll be packing up for the country.