The Seasonal Wardrobe Shift Is Here

Today is the first day of the summer clothing season. It’s 60º in New York, and 52º in Paris, where I wish I was today. I’ll bet the Chestnut buds are about to pop. It’s sweater weather (a tan cashmere Martin Margiela V-neck) and I’m wearing white-and-brown saddle shoes. My assistant Michael showed up for work in off-white-and-brown saddles today. I know we were both shod for summer, because today is the first business day of the year where white is traditionally considered right. It’s one of those nice old fogey rules that I like to keep up, the same as taking my hat off in an elevator or walking on the curb side of a lady.

Nobody loves rules like an anarchist, which I consider myself in theory. To a real anarchist, laws are unnecessary because good manners should be enough to deter improper actions. Usury is tacky. Assault is undignified. Identity theft is simply not done. I know I’m an idealistic dreamer in this, but I have every confidence that some day humanity will be guided by cultural principles, not legal codes.

To me the rules of dress are simply proven principles, like the Golden Section or the Fibonacci number. I don’t say you can’t wear white shoes before Memorial Day; but I tend not to. And in my own personal code, because of global warming, I have moved the official white shoe day forward to Major League Baseball's opening day, and extended the white shoe season through the World Series. 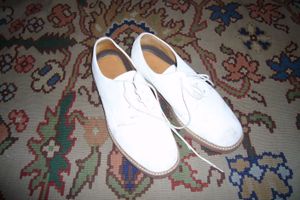 My white dinner jacket has finally been located. (I couldn’t find it the other day when I wanted to show it to some guests. It was in the basement, thank the insect god unharmed by the moths, carpet beetles, and other vermin that frequent that dicey space.) The seersucker is ready to go, although it will not be premiered on a sub-80º day, as are the linen and madras.

Let’s think about linen for a moment. There is no good reason why linen should be worn only in the warmest months. In our time of global warming, linen should be worn much more often. For one thing it is a much more environmentally-friendly fabric than cotton, which is one of the most problematic crops in the world. (For enlightenment on the problem of cotton I highly recommend watching the documentary The World of Monsanto.) Linen is not only Earth-friendly, it is also longlasting and superior in strength. I have a great old Issey Miyake linen suit that is heavy enough for October and I have no compunction about wearing it then. 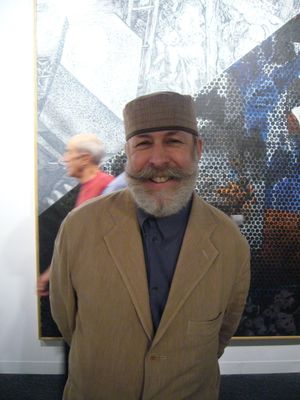 White suits or suits in the ice-cream hue range are traditionally for summer, although NBA coaches seem entirely unaware of the convention. And of course Tom Wolfe has made winter white a dandy’s splendor, and women have made it an institution—so there’s no reason men can’t wear white of a certain weight in outerwear. It has a long and honorable tradition among “Alpine troops,” and my wife has a wonderful Jean-Paul Gaultier toggle coat that I would wear if it were my size.

All of this is common-sense stuff. But I would have absolutely not worn my saddle shoes last Friday. A man has to draw the line somewhere. (Such as the Tropic of Cancer or the Tropic of Capricorn.)

Anyway, the last week or so has seen me storing away the overcoats, the cold weather gear, and my heaviest suits (the 13- to 14-ounce Savile Row numbers conceived in their best no-central-heating tradition), and pulling out the Bermudas, the polos, and the patterned trousers. And suddenly here’s a whole new selection of duds that I haven’t seen or thought about since last September or so. The seasonal transition is interesting because it’s a natural moment for wardrobe appraisal and analysis, not to mention taking stock of one’s figure. Are you ready for the pool, the links, the clay and grass courts? Are you ready for lolling, basking, and shade-sitting? Are you ready for the seasonal plumage display of an expanded visual spectrum in line with the floral splendor of the botanical world? Are you? 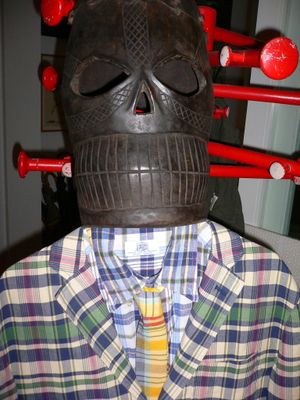 With my madras and linen pressed, I feel rather ready. But every season one notices a few areas that could use reinforcement, improvement, or elaboration. I believe in buying substantial wardrobe additions when I’m flush, but shopping seasonally even when on a budget, believing that you can stick with the same basics, suits, blazers, trousers, etc., by refreshing them with new shirts, ties, and socks. And so I’ll be out there over the next week looking for ties that say “this summer,” some new polos, and socks.

I’ll be out looking for white socks to wear with my white shoes. And I don’t mean tube socks. I mean white hose. It’s something every well-dressed man should own. I’ve found good white socks at a good price at Barneys New York, on and off, and have also found good quality thin white socks at Uniqlo. In fact I may head over there right now. And after years of trading barbs on the issue I may go over to the position of GQ “style czar” Adam Rapoport on shorty socks. I have been mocking these for years, suggesting that the men’s sub-anklets should feature the same pom-poms one sees on some of the ladies’ equivalents, but after several seasons of observing these socks in foursomes I have developed a tolerance that, combined with my own tan line, has shifted my position. So where do you buy yours, Adam? 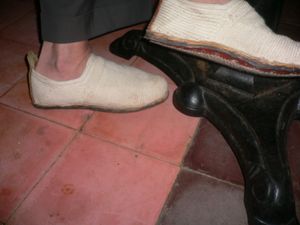 Of course, for a lot of my friends summer means no socks at all till September. I am not one of the perpetually bare-ankled crowd, as my large Irish feet tend to perspire, but I do find tanned bare ankles okay. But they have to be tanned first. So I’m working on them weekends. 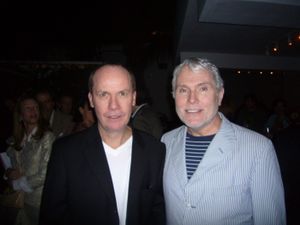 The author, in bespoke seersucker from John Pearse and Martin Margiela tee, with the artist Richard Prince

What will I buy this season? I’m always on the lookout for good tees wherever I go. A.P.C., Agnes B., Margiela, Supreme. As for tailoring, I have my old two-button light blue pincord suit in the pile of clothes to be donated to charity. I’m sure it will still look good on someone, but I need a hipper cut. I’m guessing that I bought this at Brooks Brothers ten years ago—as I recall I was on a break from a commercial and I went into the store with Kate Moss. They are cheap to begin with and this one was on sale. I may have paid about a hundred bucks for it. Kate wanted a pincord suit too, but they only had them in boys and they couldn’t fit her. Anyway, I need a slimmer suit.

Brooks still offers pin cord, and they’ve modernized the silhouette with slim lapels and flat-fronts, but at $598 they’re not the steal they once were. The GQ boys seem to favor the Uniqlo whipcord suit and I don’t blame them. They’re sharp and absurdly inexpensive. Sold separately, I think the jacket is $79.50 and the trousers $39.50. You almost can’t afford not to buy one.

hi glenn, will you talk on the blog about what happened at interview? im actually really disappointed. i liked the new direction the mag had taken. im thinking especially of an interview you did with richard prince, and an old republished chat between jasper johns and rauschenberg. i guess now it's going back to teri hatcher covers?

Graphic Tee's are in and INDIE PEACE shirts are a great item to have during the Summer and also for the Fall! Check out www.indiepeace.com for more information.