< Recession and White-Collar Crime | Main | A Personal Philosophy of Drinking >

Auguries of the Inauguration 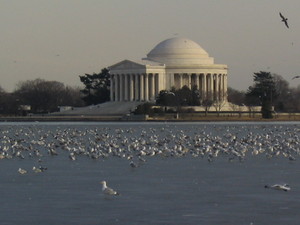 Inaugurate comes from augury, and it means to take auguries or auspices from the flight of birds, and to install after making such observations of the creatures of the air. Once upon a time the installation of a leader would have involved getting the priests together and watching how the birds flew around the buildings. Today, of course, we ignore the birds unless they shit all over the architecture or bring down an Airbus, but I do think that the arrival of a new leader should be accompanied by some form of augury. I am completely untrained in analyzing the flight of birds, but I have gotten interested in the subject. When I was involved in throwing a big party at the Miami Museum of Art around Art Basel I got completely distracted by the turkey buzzards perched on the tall building shaped like a Mexican pyramid overlooking the plaza, and the loopy flights of the big birds who seemed to be watching the inflation of a sixty-foot Jeff Koons balloon there.

Of course, with the new urban landscape it's not so easy to observe the birds, but I still get a thrill out of watching a big cloud of them move as a single organism, and I can see how there seems to be some manifestation of a higher power in their actions—it is a fine model of how a group of seeming individuals can move in unison as a single entity. And that, of course, is what res publica is all about, no?

So for lack of birds and actually being present at the inauguration in Washington, which with its neo-classical buildings so closely resembles an ancient capital like Rome or Athens where augury was routinely practiced: The only birds I was able to observe were the whirlybirds, particularly "Marine One," the presidential helicopter that took President George W. Bush away from the scene of his crimes. Over the sound of the rotors you could hear a chant go up in the crowd, "Nananana nananana hey hey goodbye." It sounded marvelous. And I also took augury from what is generally considered to be "for the birds"—fashion. 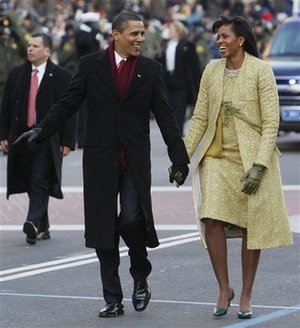 The Obamas looked marvelous at the inauguration. They departed from what would have strictly traditional garb, dispensing with morning clothes for men in favor of simple business suits. And for the inaugural balls Mr. Obama improvised his own formal ensemble, combining a white tie with a tuxedo, a notched-lapel tuxedo with flap pockets at that. 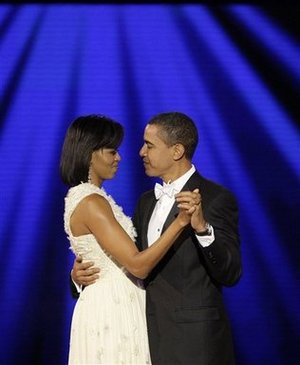 He is a man of his times, not traditional but traditionalesque. He cuts a very dashing figure, but I would have preferred peak lapels, no flaps, and less of a spread collar on his formal shirt. 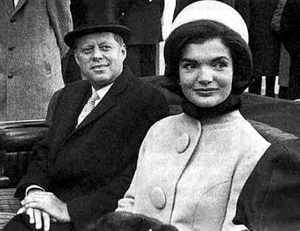 For all the Lincoln symbolism that Mr. Obama invoked I would have liked to see him sport a topper at his inauguration. John Kennedy actually wore one to his, as you can see here, and then dispensed with it, no doubt wishing to avoid the dreaded "hat hair" look afflicting his famous locks, and ushering in a half-century of male hatlessness. There weren't that many hats in evidence on the dais, thought some in the crowd made concessions to the cold by covering up, including President George H.W. Bush. Poppy wore a a turtleneck and a trooper hat with earflaps (fox?). Teresa Heinz Kerry wore a fur hat big enough for a Cossack. The most bizarre look was the baseball cap sported by Senator Joseph Lieberman. I couldn’t read what it said on it. I don't think it said "Tuskeegee Airman." Maybe, "What, me worry?" 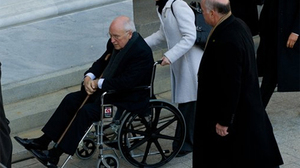 Mr. Cheney, who arrived in a wheelchair, wore a rather sinister black fedora with its brim turned down, evoking Darth Vader comments. 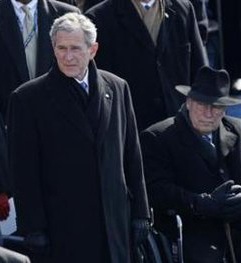 Senator Kennedy looked well, although he suffered a seizure at lunch, arriving in a beautiful fedora with its brim turned up optimistically and a sky-blue muffler. Justice Scalia looked bizarre in a beret and earmuffs, as if he were imitating Erasmus. His attire was, dare I say it, impeachable, while Justice Kennedy also looked bizarre in a black English driving cap with earflaps. Justice Stevens also seemed to be wearing an exotic black hat; and Jimmy Carter sported what appeared to be a driving or golf cap, in brown. I guess Presidents deserve some sort of fashion pardon, but Carter, Bush 41, and Clinton, in a bright yellow scarf, all looked like they were dressed for the Army-Navy game. Or was it Harvard-Yale? 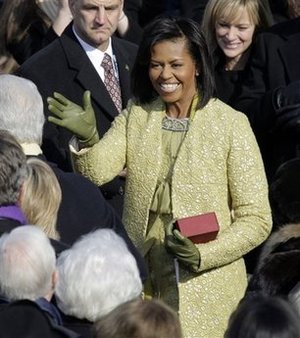 Mrs. Obama was unimpeachable in a beautiful gold ensemble of satin-backed, wool guipure lace designed by the wonderful Isabel Toledo. She looked regal but unpretentious, and her daughters looked immaculate in their bright colored coats, apparently from J.Crew, a nice populist touch. 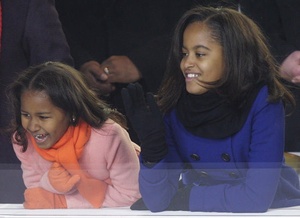 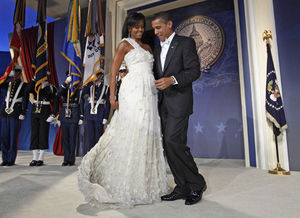 Later, at the balls, Mrs. Obama wore a sparkling off-white long dress with one shoulder strap designed by the 26-year-old Jason Wu. Robert Verdi, a so called style expert commentator who wore blue sunglasses on top of his bald head while he prated on television, complained that she was wearing a silhouette that had been worn before (by Nancy Reagan who wore a one-shouldered Galanos gown), and suggested that she should have been wearing a halter top. She looked divine especially when the POTUS gave her a spin as they danced at each of the ten balls they attended. It seems that Mrs. Obama will be a most unpredictably fashionable first lady who's not afraid to go with new and underdog designers. 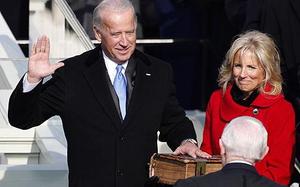 The Vice President looked sharp, as usual; in fact he looked better than usual because his hair wasn't doing that flip in back like it did at some of the debates, and his Chesterfield overcoat and black silk scarf were a nice elegant touch. All in all the new administration looked very sharp. I would advise Rahm Emanuel to wear a white shirt in 2013, but he still looked cute. This group has the potential to be the greatest administration of them all, or at least during the memories of the living. It was an auspicious start. The birds seem to be singing today.

And Mr. President, if you need a Chief of Protocol, the Style Guy is available.

That was Mr. Cheney? I thought it was Mr. Potter from It's a Wonderful Life...

check out http://istyleu.blogspot.com. this is probably the only posting out there on what barack was going to wear for the inaguration ball. it was pretty spot on too. from the tux to the watches, his look was very classic with a twist of modern (slim fitting tux jacket).

check out http://istyleu.blogspot.com. this is probably the only posting out there on what barack was going to be wearing for the inauguration. it was pretty spot on too. his style was classic and very debonair. no need for anything fancy. the president made all men proud.

Wow, I am actually a bit surprised Glenn. You usually tout yourself as the "Style Guy, not the Fashion Guy", but here seem to have dropped that pretense. I would say Obama looked awful in whatever he calls the getup he wore to the balls. It was neither tux, nor tails, nor business suit, but some sort of horrid combination of the three that made him look like help instead of host. I would expect more from him, as he does often look sleek and classic. As for the first lady, the color options were, shall we say, unfortunate. Lemon and lime go together fairly well at times, but these shades reminded me of a Washington movie featuring characters with spinning heads. Her gown literally looked like it came off the peg at Forever 21. The girls did dress well and looked the part of a family of the head of state, perhaps their parents should have imitated them instead of resembling utilitarian heads of government.

You might be in luck, as the former Chief of Protocol, Amb. Nancy Brinker, is not being retained in this administration

I second the nomination of Style Guy. Keep up the good work.