< Auguries of the Inauguration | Main | I Gotta Be Me >

A Personal Philosophy of Drinking

Keith Richards, who is about to publish a book of his sayings that’ll make him the Yogi Berra of Bohemia, once named his personal hobby band the X-pensive Winos. This handle is an appellation I can subscribe to because for the last…maybe ten years…it’s hard to say exactly, because of the wine, I have more or less limited my consumption of alcohol to wine. It’s not that I’ve taken a modified pledge or anything. I have at least one margarita annually and the occasional beer (probably a Guinness), but after considerable years of trial and error imbibing I came to the conclusion that I was better off sticking with the wine.

One reason I came to this conclusion is that humans have been drinking wine since prehistory, whereas we’ve been drinking distilled spirits for less than a thousand years. From this I speculate that the human liver has had thousands of years more time to adapt to the wine habit. As a believer in evolution I know that we may not have developed the antibodies to deal with flavored vodka, but somehow I’m confident that my body is equipped to handle a liter of Barolo. I also know from experience that spirits present more danger. It’s easier to go too far with them, particularly if you tend to confuse thirst with Thirst. Do shots? That’s okay, darling, I’ll drive.

Another thing about spirits; I know that the sophisticated palette is supposed to like Scotch and cognac and so on. It’s an acquired taste, they say. Whereas I remember my grandma giving me a sip of her beer as a toddler and liking it. Mmm, beer good! I also remember thinking wine wasn’t so good. I later realized that it was probably from a vineyard in Lake Erie. Wine tastes good. But anything you have to put fruit juice in or is “an acquired taste,” I think it’s quite possible that you are fooling yourself. I did go through a period of drinking Scotch about twelve years ago, but that was because I realized I would never have more than one. I know that sounds terribly unsophisticated but it’s the truth. My grandfather, whatever heavenly bar he may be frequenting now, could be disappointed that I have grown gray without ever finishing a martini, but he’d probably give me credit for sticking to my tastes. He did give me my first sips of Château Haut-Brion, the Bordeaux that bears my surname, and Château d’Yquem, so maybe he spoiled me. 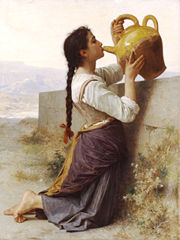 When I first embarked on the wino lifestyle I even attempted to drink the fruit of the as the Romans did, diluted with water. I only did this with white wine—I think it would spoil a good red—but most of us have enjoyed a spritzer, and really a spritzer is how the Romans drank—without the ice, of course. (Although if they had snow they would spritz with that.) 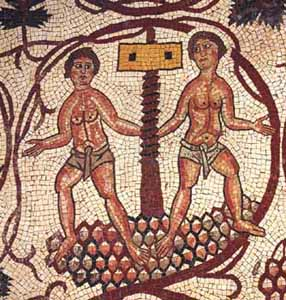 In some of the classic literature, drinking wine full-strength is referred to as drinking “Scythian style.” The Scythians, of course, were equestrian, trouser-wearing nomads considered relatively uncivilized, and so this was not a chic practice (nor, we may assume, was the Scythian practice of throwing hemp flowers on their campfires until they giggled.) 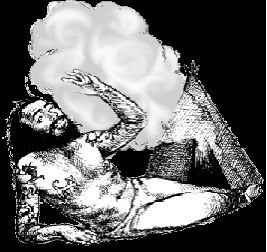 There is much to be said for the dilution of wine, particularly when one is making a long evening, or day-and-evening, of it, and I still enjoy spritzing my wine when I have a night during which a clear head is important, and I also still like spritzers in summer before dinner. But I have resorted to Scythian style imbibing, which is really the only way to go when one is dealing with serious vintages.

Serious vintages are also a good way of keeping oneself from overindulging, at least if money is an object for you. I don’t know about Keith Richards, who might be able to drink Petrus out of the bottle like it was Jack Daniels, but I find that if I’m drinking a bottle of Château L’Angélus or Ducru-Beaucaillou, I’m less likely to open that second bottle and then cork a leftover half, and if I do I’ll feel a little guilty. (But I’ll probably have less of a headache than if it was a ten dollar Chianti.)

In monitoring my wine intake I have also observed that if I drink a nice full-bodied red that I will drink less. I love white wine, especially in spritzing season, but it seems that there’s something about white that makes you keep drinking it. I used to think it was a blood sugar thing, but it may just be that there’s something in red that makes one mellow. White is more high-energy hilarity. At least that’s the way it seems with the ladies who lunch. I myself have on numerous occasions regretted that second bottle which seemed to go down so easily. But I never have much problem getting that first glass to go down. Maybe it’s a demon in me, but maybe it’s a healthful impulse. I genuinely believe that a good vintage is one of the finest forms of health food.

The distillation of alcohol, a great scientific breakthrough ironically attributed to the Arabs, and prized by the alchemists and physicians, of course led to the creation of cognac, whiskey, vodka, tequila, all of the drinks we know as spirits, as well as a wide variety of liquors and liqueurs whose origins are in herbal medicine—such as Fernet-Branca, which was discussed here some months ago. (And which we have a sip of now and then for medicinal purposes.) But in some way I can’t help but think that the cultural enthusiasm for liquor as a daily source of alcohol, which probably peaked in the 1950s or 1960s, before the wine revival, is related to what I consider one of the greatest of Western fallacies: the active ingredient. 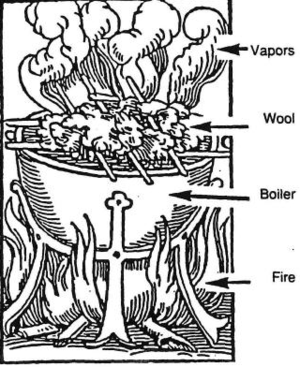 Today it’s crack not the coca leaf, heroin not opium, and overproof not vino verde. Scientists are always looking for that one thing in the ancient potion that does the trick, but there’s the trick. I remember a kindler, gentler herb before scientifically inclined growers began to believe scientists that THC was the “active ingredient” in cannabis and to disregard other ingredients such as CBD, giving rise to the sensimilla industry and making the naturally benevolent plant into something resembling what its enemies claimed it was.

Today we are finding more and more health claims for wine’s healthy properties, such as its antioxidant effect. Maybe it’s time we start believing that old Bacchus knew a thing or two.

My house wine? I almost hesitate to say, but we seem to be running toward Château Brillette, a nice, well-balanced Cru Bourgeois Haut-Médoc that rated a “90” from Wine Spectator for the 2005 vintage and costs under $30. That’s enough to keep me from swilling it like water. When it comes to white we’re pouring: Kratos by Luigi Maffini, which, despite its Greek name, is a Fiano that comes from Campania, and costs about $20. I’m also keen on a white Torrontes called Crios from Argentina, made by the talented winemaker Susana Balbo. It’s about $16 and unbelievably heady and complex in a floral way. The cats who make Sassacaia turned me on to it.

I wonder what Keith is pouring tonight.

Glenn, I'll have to respectfully disagree with you on the alcohol content. The wine was almost certainly stronger. Falernian wine was somewhere closer to 16% or more. For reference see this encyclopedia set up by the University of Chicago: http://penelope.uchicago.edu/~grout/encyclopaedia_romana/wine/wine.html. In addition, despite conflicting reports, there was distillation in the ancient world, and it was known in much of the Near East, already from the second millennium BCE. The Seleucid Empire then spread it farther west during the years c.300-100 BCE. While the Romans may not have distilled it would be false to say that other ancients in the Hellenistic world did not. (See e.g.:Martin Levey (1956). "Babylonian Chemistry: A Study of Arabic and Second Millennium B.C. Perfumery", Osiris 12, p. 376-389; and Edgar Ashworth Underwood. Science, Medicine, and History: Essays on the Evolution of Scientific Thought and Medical, p. 251). Thus since distillation was known and possible, fortification of wines was as well. As it would be unfair to just post these behind a pseudonym, respectfully,

I take exception to fraxbo's comment. Many winemakers today are doing it the old fashioned way, in terracotta amphorae, fermenting on the lees, even burying it during fermentation, and the results are unlikely to be greater than 14%. The Romans had no technology for fortifying their wine, although sometimes they altered it with honey and spices. The wine water mixture they drank was likely between 3 and 6 percent alcohol. Here's an article on it: http://www.gourmed.gr/gourmet-news/7/81/9980/Ancient-wine-artefact-returns-to-Rome.html

I don't know if you are aware of this, but the reason the Greeks in the Homeric epics and later classical and Hellenistic Greeks alongside their Roman counterparts used to add water to wine because their wine was something completely different from ours. Their product was closer to a fortified wine such as Porto, and was thus quite a bit stronger, more viscous and sweet. The reason for the water was to make it drinkable beyond the first kylix. You can see it in their descriptions of the wine in written form, and the depictions in sculpture, mosaic, and painting. In effect, what they were actually drinking was pretty close to what we drink now without the water, only sweet.

He's an indulgent sort, so I'd imagine he'd be sipping a martini with ice sourced from a 12-20,000 year old iceberg, as in this video put together for Canadian Tourism: