Sometimes I find Billy Strayhorn's "Lush Life" going through my head (the Johnny Hartman-John Coltrane version). Particularly that line, "a week in Paris could ease the bite of it…" And so this year, to ease the bite of aging, I decided to spend my birthday, and a few more days, in Paris. Almost a week. It turned out to be fashion week so that made it a little extra crazy—crowded hotels and booked restaurants and it was even harder to get a taxi than usual as the witching hour approached. One night we hiked all the way from the Palais Royal to L'Etoile in the rain, as a taxi was "impossible" (imagine the French pronunciation.)

Still, it was a fantastic time. Paris was in the fifties, Fahrenheit-wise, and although the flowers weren't out yet, the models were, and lots of other beautiful people, making this most beautiful city very lively indeed. I can't think of anywhere on earth where the sport of people watching is more fun. Everyone seems stylish (or at least people of all ages and from all walks of life), and you see lots of beauties of both genders, often in the act of kissing. For a reason that science may eventually be able to explain, much of this outdoor osculation occurs by the Seine. So I was glad to be in Paris with my wife (pictured here). I'm usually there on business, solo, and the kissing can be tough to watch. Anyway, I found that many of the most interesting style cases I observed were what we tend to call senior citizens. I loved it. A lifetime of experience and shopping should make style something that gets better and better, but we don't observe a lot of that kind of progression this side of the Atlantic. On Sunday I saw a man whom I assumed to be in his late eighties sitting in a café wearing a gray flannel blazer, a shirt with a silver torso and a tartan collar, and a black tie with a large red abstract shape on it. He looked as bohemian and rarefied as Ezra Pound. He was so spectacular and dignified that I didn't have the nerve to ask if I could take his picture. Besides, I was deliberately not working.

I did have a bit of what they call a busman's holiday, however, taking in a few fashion shows. I went to the Yves Saint Laurent show on top of Le Centre Pompidou, aka the Beaubourg, and that was about as good an entertainment as one can find in this city. It had beauty, inspiring design, and, being that it was the second show of the new YSL designer, who had the difficult task of following Tom Ford and the great maestro, there was lots of drama, too. And it was a triumph, as the show brought back much of what made YSL great in the first place, but with a totally contemporary spirit. No retro, no ghosts, just pure Parisian chic. It was utterly classical, but with a sort of futuristic optimism. The other show that moved me was that of Antonio Berardi—another Italian who shows in Paris and reflects its zeitgeist more than that of Milan. Unlike most designers today—except the master of sexy, Azzedine Alaïa, whose influence was felt here—Berardi's designs flatter the curvy body and are always suggestive, but never vulgar. Check out this number. The seams are sewed in such away that bare flesh shows through in all the right places. A wine writer would probably put it this way: notes of Giacometti, Bridget Riley, Ridley Scott, and George Lucas. The most ambitious clothes had elaborately cut layers with notes of Mayan architecture and intergalactic storm troopers. There were high levels of both fashion and show in this fashion show, but the ultimate test is, would you want the girl on your arm to wear this? And the answer was basically, yeah, yeah, yeah…

I went backstage afterwards to congratulate Antonio, whom I've spent a little time with in New York, and I was most amused to see this sign at the spot where the models stepped from backstage to the runway. It's the kind of thing that designers and show producers tell the models and often put down in black and white. Or in this case, black and red. 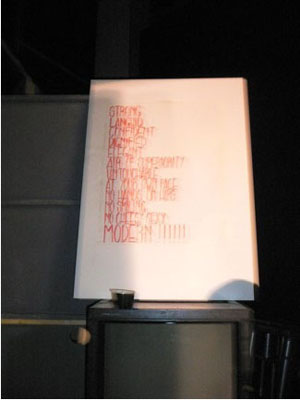 STRONG
LANGUID
CONFIDENT
DIGNIFIED
ELEGANT
AIR OF SUPERIORITY
UNTOUCHABLE
AT YOUR OWN PACE NO HANDS ON HIPS
NO SMILING
NO CHEESY SEXY
MODERN!!!!!

As the Terminator said "I'll be back." Soon.

Glenn, you've been absent from the GQ audio podcast for weeks now. We miss you.