How I Eat Lunch

I love my neighborhood. I have had several homes in the general Noho, Western East Village, Bowery, and Nolita neighborhoods, and despite the frequently unfortunate development going on, I'm not leaving. I used to call it BumHo, but the winos are long gone. I used to call it Boho, too, 'cause that means bohemian and Bowery and Houston are kind of the center of something, but that never caught on. Anyway, it's a good, as-yet-unruined part of my neighborhood. And it's changing fast. The Bowery, once the city's most architecturally diverse and kooky avenue, is threatening to turn into Sixth Avenue, i.e., a future slum of ugly development-boom highrises.

There are some bright spots, though, like the New Museum going up, and Eric Goode and Sean MacPherson's new Bowery Hotel. The latter project is particularly admirable because the guys who brought us the Park and the Maritime bought what could have been the ugliest building in New York and completely rebuilt it. They're also opening a cute little hotel on 4th Street next to the B-Bar, tentatively called Cooper House.

Anyway, one of the things I love about my 'hood is that it's a good place to eat. We've got a good breakfast-and-lunch spot in the Noho Star (they do a good Chinese dinner, too). We've got the great dim sum and Peking duck of the Chinatown Brasserie, and two excellent Japanese places: Hedeh on Great Jones, in the building that was once Jean-Michel Basquiat's studio, and Bond Street (between Broadway and Lafayette). We are within quick delivery range of Balthazar and Kelley and Ping (on the Bowery). And we've got the best burger in town, in my opinion, at the tiny eatery Sparky's, on the triangle of Lafayette, Mulberry, and Bleecker. Sparky's is organic comfort food. Hot dogs, hamburgers, grilled cheese, fries, cole slaw, stuff like that—but all organic, grass-fed, and local. My wife says they have the best hot dogs anywhere. I like the bacon cheeseburger with the works. The lemonade iced tea is really good, and they sell corn-free sodas! 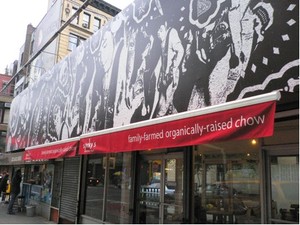 I have mixed feelings about declaring Il Buco the best restaurant in New York, because I love the fact that I can walk in some days and it's just me and Chuck Close's table for lunch, but I feel a change is bound to come as Ian Schrager's spectacular Herzog & de Meuron building comes closer to completion. I mean, one of these days I'm going to have to make a reservation. You do have to book ahead for dinner. Naturally. They serve spectacularly good food, and have a wonderful wine list. The chef, Ignacio Mattos, formerly of The Spotted Pig, is brilliant.

But Il Buco was great before Mattos arrived, under chef Ed Witt. I think that the food has been consistently (though perhaps increasingly) great has much to do with the restaurant's philosophy—start with the very best ingredients available. (At lunch time when you're crunching away on an unbelievable pork panini, you sometimes see the heritage Tamworth pig carcasses arriving from the Flying Pig Farm upstate.) Il Buco does for gastronomy what Sparky's does for fast food. They start with superlative ingredients—oil, salt, bread, produce, meat. I think some of my lucky friends are going to get Il Buco gifts for Christmas this year. They sell salt, oil, and vinegar in sets.

Anyway, I have mixed feelings about publishing this, so, well, uh, I'd prefer if you went there on the weekend, okay? They're closed Mondays. I'll be at Quartino, but I'm not telling you where that is. 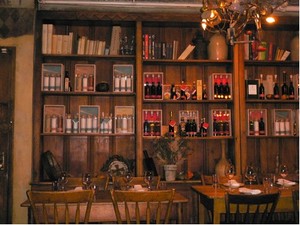