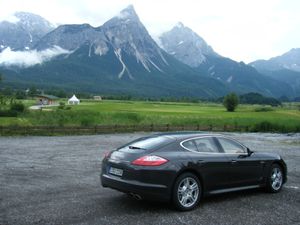 You'll be able to read my story about the Porsche Panamera in GQ's September issue, but I had to share something with you now about my test drive in Germany over the weekend because it's changed my automotive worldview.

Like anyone who loves cars, I was looking forward to driving on the Autobahn for the first time—the no-speed-limit stretch of German highway that's the envy of any American with a car that's meant to plow ahead with speed in the triple digits. I beat my previous public-road record of 120mph by easing the Panamera to a smooth 150, but only after I felt comfortable traveling fast enough to get me a jail cell instead of a ticket back home. (Even in a purpose-built speed machine like this Panamera, Autobahn speeds can be a little scary to newbies.) Still, I felt pretty damn proud of getting it up there without, you know, dying. But then I saw a Mercedes E-Wagon trailing and subsequently passing another journalist in a Panamera who I later found out was traveling at 160mph. Apparently, my 150 is only considered kind of, sort of fast here in Bavaria. I was a little crushed on the inside.

And then, during a particularly curvy, mountainous, non-Autobahn section of this drive, I found myself barely keeping up with a tiny 2.0 liter VW Polo (it's smaller than our VW Golf.) "Is Mario Andretti driving that thing?" I thought. Nope. When I finally caught up—at a stop sign—I saw the long brown hair. It was just your average female German driver.

The old saying is true: It's not the car, it's the driver. Germans, lucky for them, have the best of both.—kevin sintumuang