While on assignment at the 1975 Cannes Film Festival (one of her first commissions), GQ contributing photographer Brigitte Lacombe met Dustin Hoffman. The actor invited her back to the States to shoot on the set of All the President's Men—the first of hundreds of film sets and theatrical stages she'd photograph over the next thirty years. But to call Lacombe a "celebrity photographer" doesn't grasp the scope of her art (she cracks the façade of stardom like few since Avedon), not to mention her ambition (she has trekked across the globe to document politicians and political unrest). Describing her process recently by phone, Lacombe said, "I just try to create an intimate atmosphere." Here, the photographer—whose work is stunningly rendered in her new book Anima Persona—offers GQ.com a behind-the-scenes look at some of her best shots.—sarah goldstein 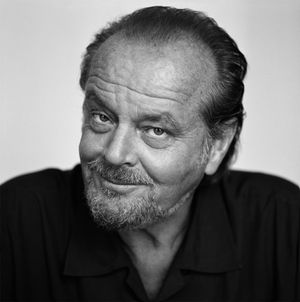 Brigitte Lacombe: "There are some people who are so set in the way they present themselves, and the more it goes on the more difficult it is to see them as anything other than the prepared image. Jack Nicholson is one of these people and so I was trepidatious about shooting him because I thought it would be very hard to get a portrait of him that was not the usual Jack Nicholson portrait. In the end I think it's impossible to do anything very different with him, but still, as a portrait I think there is something genuine that comes across in his smile. He also looks very handsome." 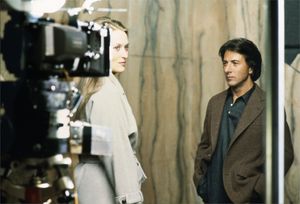 "Although Meryl was not that well known yet, I think everyone knew that she was the most promising young actress. There is something about her that is so luminescent; she seems to come out of the movie camera. This was just one day on the set—it seems like a still moment but they were talking. I love how Dustin is looking at her. It's just one of those moments that's beautiful when you catch it. Also when you work on a film you don't know what it's going to become, you never know, so when it ends up that it's two of the greatest actors in one of the most important films…well, that's very special." 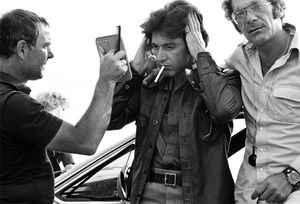 "Just before a new take the actor is checking himself in the mirror, checking his hair. He's not looking at himself; he's looking at his character. Some people mistake this for vanity, but that's not it at all. He needs to make sure that the character is there." 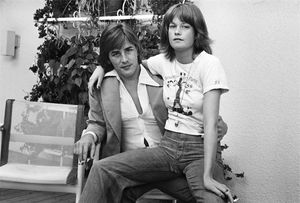 "I came to the house to do a portrait of her and I guess he walked in while we were shooting and, well, there they were. They were so young, very American looking. I actually think they look quite alike here. And they are obviously so entwined as you are when you're at the beginning of a great love affair. You can see it from the way she sits on his lap." 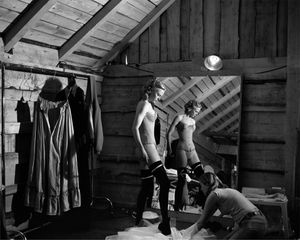 "They had recreated this village in the mountains and she was getting dressed in one of the houses on set. It's such a classic thing, the dresser helping the actress get into her clothes, this could be at any time. She did not pay special attention to me, she just let me be. That attitude all comes from the director. The director invites you to be part of his team and then the actors just accept you. I had a great friendship with Anthony Minghella, he was an exceptional man, and I worked on almost all of his films." 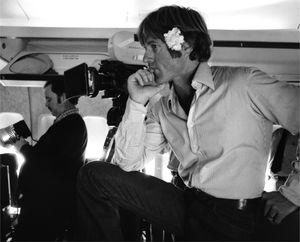 "This was his first time directing a film, but it was at the height of his stardom as an actor. It was a very intimate film, very small. No one knew that this film would end up being important or that he would get an Academy Award for it. This was in flight on our way back to California from Chicago. They were shooting a scene on the plane in that moment and he was watching very intently. I don’t know why he has the flower in his hair." 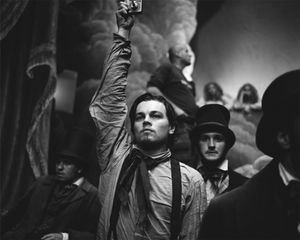 "They shot Gangs of New York at Cinecitta Studios, which is the most famous studio in the world—it's where Fellini shot all of his films. This was in the midst of doing a big scene and I noticed that Leo had this little digital camera. I saw him in the middle of this big crowd in this period film and I thought it was such a beautiful gesture. He wanted to document everything, too." 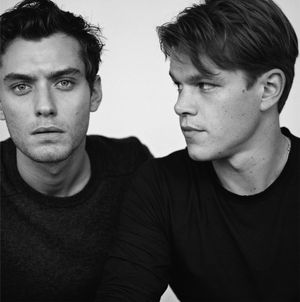 "This was for Frank Rich's story about The Talented Mr. Ripley. Matt was not the huge star that he is now just yet, and neither was Jude, but everyone had their eyes on them. They recreated a sense of what their characters are in the film through a very simple gesture. I asked Matt to look at Jude because in the film he wants to be Jude's character. All I said was, 'Will you look at Jude?' They brought their own intensity to it." 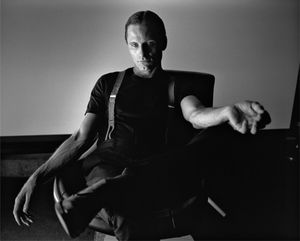 "He was doing another project in Hungary so we shot there. He is just the most handsome man you can imagine—distractingly handsome. But when you are with him, it's not that you forget, but he is so elegant and so kind and also very interested in photography; he's published his own book. Our location person had found us this night club that looked very much like a place from the '50s, and it was in the middle of the day so it was kind of abandoned. He was very easy and generous, he gave us a lot of time. I love this picture because you can see how elegant and long he is from his arms." 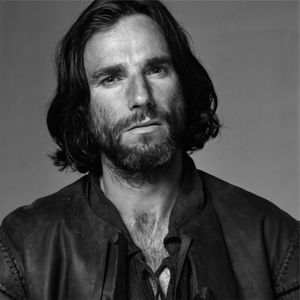 "There are two actors who I've never seen enjoy being photographed. One is Meryl Streep and the other is Daniel Day-Lewis. I've photographed him regularly over the years and he's very professional, but he never enjoys it. This was on the set of The Crucible and I created a mock studio in a barn. It was a very intense part, as always, for Daniel and he was completely in character; so really this was a portrait of his character." 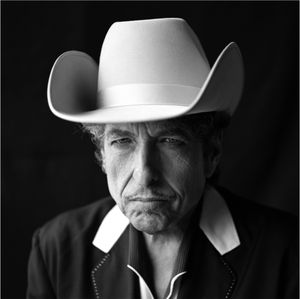 "This was in 2004 when Chronicles came out. He hadn't had his portrait done by anyone in 10 years, and the last person was Avedon, so I had been warned. But I happened to know someone from his past and when I told him that, he opened up to me, or at least as much as he would have. He accepted me and the situation. He was extremely funny and dry and acerbic. Between taking his portrait we went on a walk as a way to ease the tension and he gave us this tour of his ranch. There are horses on his property and abandoned cars. He's an extraordinary character."