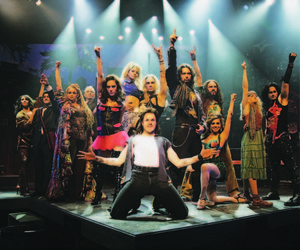 When the producers of Rock of Ages—an off-Broadway show featuring the music of Whitesnake, Poison, and a host of other ’80s hair-metal acts—announced that the party was transferring to Broadway, we nearly choked on our Tab. For one thing, the show’s directed by the woman who brought you The Pussy Cat Dolls Live at the Roxy. Second: It features the music of Whitesnake and Poison! We were compelled to investigate. It turns out what we uncovered rocked us even harder. The musical, a love story about a small-town girl and a rocker from South Detroit, has become a hot Hollywood property. New Line won a bidding war for the film rights. (Tobey Maguire is on board to co-produce.) In an interview with GQ.com, the show’s creator, Chris D’Arienzo, explains his bitching road to (gulp) Broadway.

A Broadway show featuring the music of Whitesnake and Foreigner? Explain.
Someone started their review with the sentence This show should suck. That’s everything I wanted it to be. I spent most of my young childhood out east, and I went to a lot of Broadway shows. When I was a freshman in high school, we moved to a small town in Michigan. I was this skinny little skater kid from New York City who would get beat up by dudes listening to Crüe and Scorpions. I wanted to bridge those two worlds: people who love musical theater and people who hate it. I really do hope this is the olive-branch show.

Rock of Ages is a love story set against the backdrop of a legendary L.A. rock club’s last days and the implosion of a hair-metal band. I’m pretty sure one of those characters is based on Bret Michaels.
It’s a combo platter of Bret, Vince Neil, David Lee Roth, and, in a weird way, the story line of Martin Scorsese’s The Last Waltz. I loved the Band so much. It was clear to me, watching that documentary, that Robbie Robertson was the only guy who wanted to break up the band, and everyone else was bummed.

Wait. Is this Mamma Mia! for dudes?
I wasn’t doing Rent with Whitesnake songs. Our story comes from the music of the period. Arena rock is the closest thing to a show tune in popular music—and I mean that lovingly. It’s epic, it’s sweeping, its themes are big. It gives itself to something theatrical.

Did you encounter any rights issues with the music?
I would have loved to include “Welcome to the Jungle.”

What happened?
You’d have to ask Guns. If Axl Rose hears there’s an off-Broadway show that wants to use his music, it wouldn’t surprise me if his first inclination was to think it would be cheesy and stupid and not in keeping with the Guns mystique. Which is unfortunate. I think if he saw the show, he’d dig it. Guns, Mötley Crüe, Van Halen—there are certain bands that see themselves as being in a different category.

There’s a testimonial on your site from Dee Snider of Twisted Sister.
We had a run in Los Angeles and did this premiere. Don Dokken, C.C. DeVille—a lot of them showed up. Halfway through the show, Don Dokken told me, C.C. DeVille nudged him and said, “They got us, man!” That’s what I wanted to hear from those guys.

New Line won a bidding war for the film rights. How heated was the battle?
It was probably the most surreal week of my life. It should have been exciting, but it was terrifying. For me, someone who desperately needs to be liked, all I could think was, Somebody in this equation is going to hate me.

Tobey Maguire is producing? I didn’t know Spider-Man liked musicals.
I wrote a pilot for HBO—an hour-long drama about the fucked-up people in the world of stand-up comedy—that Tobey is producing. That’s how we got to know each other. He came out to New York to see Rock of Ages, and he got really excited about it.

The show’s soundtrack includes Poison, Joan Jett, Warrant. But can a Broadway show ever really rock?
In L.A., the show played at this club, the Vanguard. It was still a working club. At night, there were kids waiting outside with glow sticks, trying to get in and dance to really shitty rave music. We had to strike the set every night. It was kind of miserable. But it was a real rock club, and we liked that vibe. We gave everyone who came to Rock of Ages a lighter. Our first tickets looked like laminated backstage passes. It was about creating this party atmosphere. People were doing shots.

Shots?
In L.A., every review I got from a friend started with I was so wasted at your show! It became the thing to do in L.A. You’d go to dinner and then go to Rock of Ages and drink and sing along. It was hilarious. The mix of people who showed up—it was crazy. Jack Black. Perry Farrell. Mark Ruffalo. Jennifer Coolidge. Taye Diggs. Lisa Loeb.

When this show played off-Broadway, you could order drinks—from your seat during the show. Is that vibe coming with you?
We sold shots in test tubes off-Broadway. That vibe—that’s something we wanted to keep. People will be able to drink in their seats.

When I think of drinks at Broadway shows, I think of terrible red wine in bad plastic cups.
Actually, we’re serving really bad wine coolers. And beer. We’re trying to go legit with it.

I haven’t had a wine cooler since I was 16. Are they as bad as I remember?
They’re deliciously horrible. If you like a nice fruit punch and you like to get wasted—there you go. Everybody wins.