Memo to the Partners 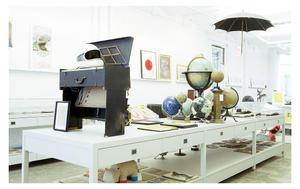 If you're on the market for gilded motorcycle helmets, antique staplers, or Marcel Proust wrapping paper, then Partners & Spade—the gallery/vintage store/studio that officially opened Wednesday night on New York’s Great Jones Street—is the spot for you. Partners & Spade is the branding consultancy started by Andy Spade (he of the ubiquitous Jack Spade bags) and Anthony Sperduti, the duo who most recently brought their old-school sensibility to bear on the J.Crew Liquor Store in the West Village. This new space will serve as their office during the week and as a gallery open to the public on weekends.

Despite the amount of stuff they’ve packed into the space (and stuff is exactly what it is), it manages to feel uncluttered. That's because everything is impeccably displayed, from a mounted technicolor bicycle to a rubber ball collection tucked away in a drawer to an aviary in the front window. (There's a sign assuring passers-by that the birds are happy and well cared for.) One of the sharpest displays was a glass case exhibiting Lehman Brothers schwag (golf hats, paper weights, a baby's onesie) as if they were artifacts from another time—which, of course, they are. In fact, the Lehman display was the only sign of the recession to be found last night. Most items for sale have price tags that only those with disposable income could realistically justify: antique globes for $650; 18th century nature books for $25,000. Even the moderately priced first-edition books and prints can't be an easy sell right now. "We planned the space a year ago," Sperduti acknowledged on Wednesday night. "Who the fuck knew what was going to happen?"

At the launch party, girls with bangs and high-waisted skirts lined up to have their auras photographed, giving the place the feel of a hipster bar mitzvah. Adults opened and closed drawers and touched the exhibits much as kids would at a children's museum. Do you need any of this stuff? No. But is it fun to look at? Well, yeah. Partners & Spade feels like a curated and better-lit version of your grandparents' attic. Someone's already dusted and labeled and gotten rid of the junk; what's left is to marvel.—sarah goldstein 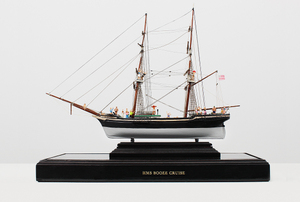