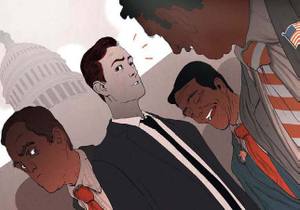 When one of our former staffers moved to D.C., he discovered that what flies in Manhattan (black jeans, pointy shoes) doesn't pass muster among the pleated khakis and American-flag lapel pins of Capitol Hill

I arrived at GQ in April 2004 as a 22-year-old schlub. I don’t say this to be falsely self-deprecating; I say it because it’s the sad, sad, God’s honest truth. Nearly every day for two years, I dragged my raggedy self into work wearing an untucked and baggy dress shirt, my hair frozen by gel, in jeans so ill fitting that they would’ve rendered any ass—let alone my ass—unidentifiable, a tiny protuberance awash in a sea of denim.

I mixed black and brown.

All of this would’ve been quasi-acceptable if I were an insurance adjuster or a back-room clerk at a Barnes & Noble. But I worked at GQ, home to some of the sharpest-dressed mofos I’ve ever met—guys who didn’t mind telling you that you looked like a Maloof brother. One particularly dispiriting day, a writer not known for his nattiness took a glance at my outfit—jeans, navy blue sneakers, a billowy brown-green-yellow-and-red vertically striped button-front—and scoffed, “You wear that to work?” He said he respected my willingness to embarrass myself.

There’s no use pretending things had changed all that much by last October, when I left GQ for a political journal in Washington, D.C. But I was getting better. I added a pair of slim-fit jeans to the rotation, along with some skinny ties and tailored jackets. In short, I looked like a New Yorker, maybe even one who had completed a summer internship at Bravo.

I wish it didn’t, but my improvement mattered to me. I liked that the folks who used to crack wise dropped the actually on the days they said I looked good. It meant I had completed a successful adaptation. And for those of us (I assume most of us) who like to look good but don’t have the stones to dress exactly how we want no matter what the situation, being in sync with your surroundings is key—right up there with personal style (defined loosely in my case) and comfort.

So then the strangest thing happens: I lug myself down to D.C., and all of a sudden I’m Mr. Fucking GQ. Apparently, what barely passed for fashionable in the Condé Nast cafeteria is cause for suspicion at the National Press Club. I can’t tell you how many times in my first couple of months here I was asked, normally by drunk girls, if I was gay.

Now, the District gets a bad enough rap for not being the most culturally edgy place—and I don’t mean to pile on. D.C. today is a lot different than the D.C. of ten years ago; there are now parts of the city just as plugged-in as the hippest hoods in Brooklyn. But that rumor about how everyone in Official Washington—Capitol Hill types, white-shoe attorneys, lobbyists—wears obscene amounts of Brooks Brothers? That shit is true! Also: pleats. Lots of pants down here be pleated. It’s crazy.

And like everywhere else, but perhaps even more so, there’s a premium on uniformity. You haven’t seen anyone testify before Congress wearing a suit from Rag & Bone, right? That’s because it would mark him as an outsider, just like my schlubby outfits did during my first days at GQ. I’m not suggesting you go all native and buy a cowboy hat if you get reassigned to Amarillo, Texas. (A friend of mine did that, a lawyer.) But context matters, particularly in professional situations.

So if you stop by the Brooks Brothers on Connecticut Avenue, you might spot me. I’ll be the one eyeing the seersucker, wondering why, just as I was finally starting to get a handle on things in New York, I chose to start over here.