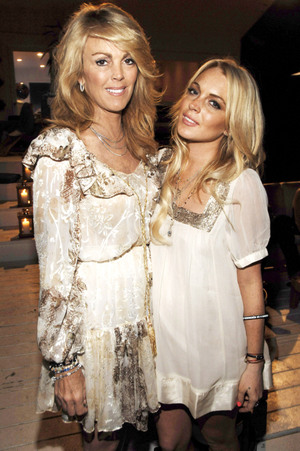 …has the season's creepiest reality show. Having done so well with daughter number one, Dina Lohan takes to shaping 14-year-old Ali's music career in a new E! reality series, Living Lohan. If the title is any indication, we're looking at jail time and nipple slips! Dina responds:

Lindsay has had a tough road. Why subject Ali to the same temptations?
I’m not going to close a door where God opened a window for Ali.

Uh, okay. What does Living Lohan mean?
It’s self-explanatory. Living the life, following us. I’m a single mom. Other moms can relate to having to work, to having the same problems I deal with. The producers wanted to set the show in Las Vegas. I didn’t want that. There’s this perception that I’m this crazy party mom, which has never been the truth.

That was my perception.
I hang out with moms! Yes, I’m Lindsay’s manager. Yes, I have to show up at events. Yes, sometimes they are at clubs. But Joe Simpson doesn’t get ridiculed—because he’s a manager and he’s respected.

Why do they ridicule you, then?
It’s because I’m a mother.

Is it true you were an analyst on Wall Street?
My ex-husband had a seat on the floor of the Commodities Exchange. And I was a chart analyst in the pit. Between dance classes and studying my craft, I would run and tell him what to buy and sell.

You could have been Suze Orman.
Oh God, no.

Do you have concerns about the paparazzi?
There are no boundaries with the tabloids. Lindsay would call me: “Mommy, I can’t even leave my house and get Starbucks today.” I mean, that’s just wrong. There need to be laws so nobody gets hurt. I think they’ve laid off Britney, the poor child. God willing, there won’t be another Diana.—mickey rapkin

Living Lohan • Premieres May 26 on E!