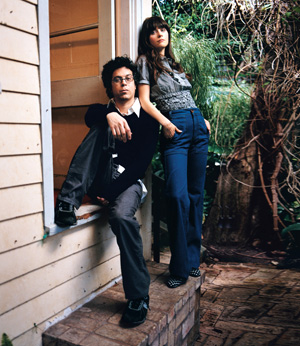 It’s a match made in fanboy heaven—indie-film fantasy Zooey Deschanel (All the Real Girls, Weeds) and raspy emo folkster M. Ward (Post-War) making music together under the title She & Him. Sure, the precedent for actress music projects is bleak—Minnie Driver, LiLo, etc.—but as anyone who saw Elf knows, Deschanel can belt out a tune. On the duo’s debut, Volume 1, she and Ward command a range of diverse songs that sample classic American genres, from jazz to country to ’60s-girl-group R&B. And Deschanel couldn’t care less if some people are put off by the actress-rocker collaboration. “I’m not sure who these ‘some people’ are, but they sound petty,” she says. “I don’t think I’m very interested in them.”