The Hall of Could Have Been 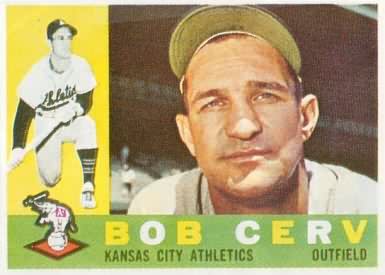 On his routinely excellent blog Soul of Baseball, Joe Posnanski of the Kansas City Star examines the careers of several Major League players who for one reason or another never fulfilled their potential. My favorite is Bob Cerv, of whom Posnanski quotes Bill James as follows: "EVERYTHING went wrong for him. He didn't lose 40 percent of his Hall of Fame luster. He lost 95 percent of it, so people will never believe how good he could have been."

Cerv, a college football star, didn't sign a contract until he graduated at 24, then threw in his lot with the New York Yankees of the 1950s, the baseball dynasty to end all dynasties (during that decade, the team won the World Series six times). Promising through Cerv, an outfielder, might have been, New York's outfield would feature various configurations of Joe DiMaggio, Mickey Mantle, and the All-Stars Hank Bauer, Gene Woodling, and Elston Howard. If you had to summarize Cerv's Yankee career in just four words, they would be: We Appreciate Your Interest.

You can read about Cerv and numerous other Hall of Fame Not Quites here.