Before I walk you through the newest designs that Kartell introduced at the Milan furniture fair this year, I want you to understand something about the company's approach to design and manufacture.

To start: Don't think of Kartell as that hip Italian company that hires big-name designers to make cool objects out of plastic. Yes, Kartell does do that—and they're damn good at it—but that's a shallow reason to be interested in their work, and if that is your approach, all you will be able to say when you look at their latest products is, "Wow, that's really cool!"

I know you can do better.

Instead, I suggest you think of Kartell as that hip Italian company that hires big-name designers to explore the process of industrialization. The question they keep asking (and answering in interesting and novel ways) is this: How can we make great furniture entirely with machines? For Kartell, plastic is simply an end to a means. "We use plastic because it's the only way to be industrial," explains Claudio Luti, Kartell's president. "It's the only reason."

What does it mean to be industrial? Consider, for example, that many Kartell chairs are made using a single mold: Molten plastic is poured into a large and expensive machine and, a bit later, a fully-formed chair emerges. That's it. Nothing more needs to be done. After the chair sets, it's ready to ship to the store. (In fact, Kartell created the first plastic chair to be manufactured this way: Philippe Starck's La Marie.)

What you'll usually find in a new Kartell product is not simply a novel shape, but also a novel process of manufacture.

This year, for example, Kartell introduced the Thayla chair, which was designed by the very dapper-looking Patrick Jouin. The chairs he's showing me here were literally manufactured the day before we spoke. 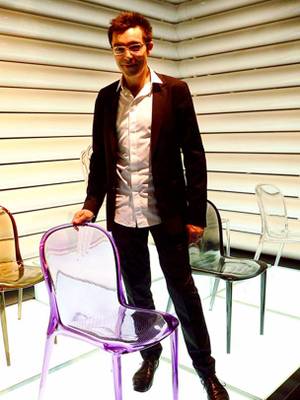 But Thayla, as you can see, has no ribbing. To make this possible without the chair collapsing when you sit in it, Jouin suggested gas-injecting the chair's legs and frame. With this process, gas is literally blown into the plastic to hollow it out, creating tubes.

These hollow tubes, counter-intuitively, make the chair strong enough that it doesn't need any ribbing, an approach that has never been done before.

"It was very difficult," says Jouin, "but what is really incredible about a manufacturer like Kartell is that you present something like this and they don't say no. They like to take risks. They say, "Okay, maybe it will not work and maybe we'll throw away the mold, but let's try. Because if we do it, nobody would try to be as crazy as us!'"

With Thayla, Jouin's intention was to link the high-tech with the past. The pattern on the seat and back, for example, was derived from the lines created by his CAD program, but is meant to evoke the cannage of a traditional chair. "The graphic is a play of something which is virtual and something which is old," says Jouin. The chair's other contradiction: "It's transparent, but it's not transparent. You can see through it, but what you see is diffracted."

Two new Philippe Starck chairs also took advantage of new processes of manufacture. The Mr. Impossible chair, for example, is made from two plastic shells (opaque for the inside of the seat, clear for the base and legs) that are welded together with a laser. The connection is seamless: Here, by the way, are Starck and Luti sharing a pensive moment at the Mr. Impossible display. 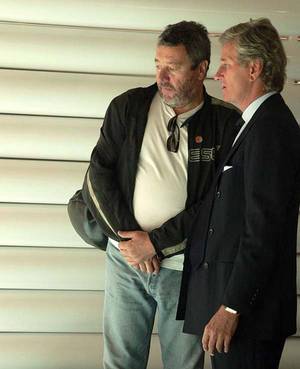 Starck's other chair, Dr. Yes, also plays with contrast between the seat and the rest of the chair. In this case, it's texture: The seat is matte and a bit rough, while the back and legs are glossy and smooth. The technical innovation here is that Kartell managed to pull this off using a single mold. 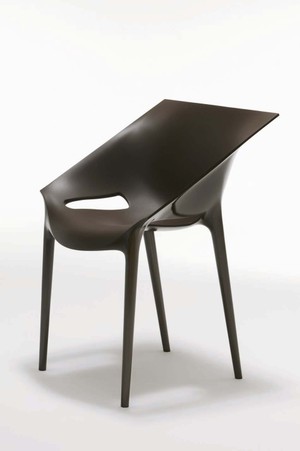