Umbra's U+ Studio Collection has two new products that make interesting use of reclaimed materials. "Reclaimed" and "recycled" are sometimes used interchangeably, but recycling usually involves some type of processing and is rarely 100% efficient. Reclaiming or salvaging (on the other hand) entails taking something that already exists and finding a new way to use it.

A fine example: Thea Yuzyk's Parquet Frame. It's made from slats of solid rosewood and costs a reasonable $55. 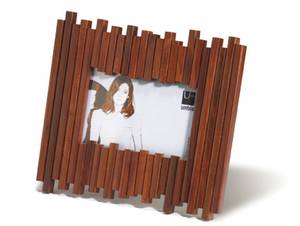 The slats are actually Indonesian railway trusses, which were salvaged when the tracks were decommissioned. (If you're wondering why such a beautiful wood was used for such a mundane purpose, it's because rosewood doesn't swell in humid climes.)

Similarly, Matt Carr's Treasure Clock makes use of toys that Carr found at the Goodwill next to Umbra's design studio in Toronto. All of the toys were on their way to the incinerator (that's what happens to donations that don't sell), but Carr snatched them up and, in some cases, spray painted them for this limited edition series. 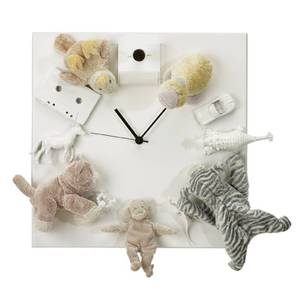 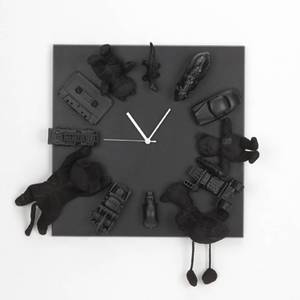 The clocks come in white and black. Only 200 of each color were made. And unlike most Umbra products, which are manufactured offshore, the clocks were assembled by hand at Umbra's studio. You can buy them at Barneys New York.