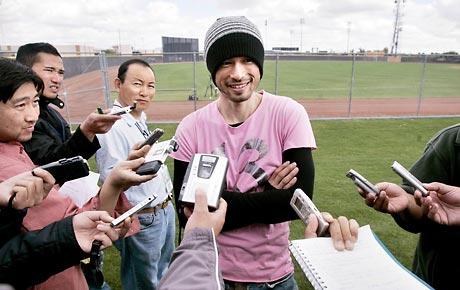 Yesterday at the Mariners' spring-training facility in Arizona Ichiro, who is in the last year of his contract, described how pissed off he is about the team's atrocious performance over the past three years.  That he was dressed in a ski cap and a pink t-shirt in no way diminished the force of his remarks, in which he declared that he's prepared to leave the Mariners to pursue a championship ring, if necessary.

Meanwhile, in Florida, Alex Rodriguez made some interesting comments about his relationship with Derek Jeter--who's essentially become a latter-day DiMaggio, an unsettling amalgam of grace and pettiness--and addressed reporters' questions about the so-called "out clause" in his contract, which allows him to terminate his contract unilaterally after this season, three years early, to explore his value on the free market.

The two men are distinctly different: physically (A-Rod has a perfect baseball body; Ichiro looks nothing like an athlete), statistically (A-Rod hits for power and average and racks up lots of strikeouts and walks; Ichiro hits singles and rarely strikes out or walks), and personally (A-Rod engages with the media; Ichiro distances himself)--but they're both first-ballot Hall of Famers who don't seem to be well situated.  Ichiro plays for a team whose front office may be the worst in baseball, and A-Rod in a town that doesn't--despite his winning an MVP (his second) and accomplishing three of the best five seasons by a Yankee third baseman, ever--properly appreciate him. It's not difficult to imagine them switching places in 2008.