Evolution of an LED Clock

"Numbers" is a disjointed, strung-together LED desk clock designed by Jonas Damon. It's gotten a lot of attention lately (we picked it for our best-of-the-year list last year): 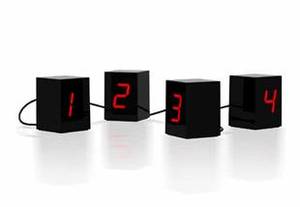 It evolved from another LED clock, called simply "LED," that Damon had designed for the British design company Habitat a few years earlier: 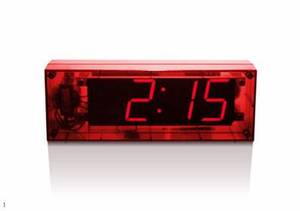 The idea behind "LED" was to reduce a digital clock to its essence—just red LED numbers and casing—and to express the beauty of the parts rather than try to hide them. That's why Damon lets you see all the screws, wires, and electronics inside the casing.

You can't buy "LED" in the States (Habitat products are only available in Europe), though a knockoff recently became available here. Damon first came across it in the Conran Shop and, despite the fact that it was a copy, he bought one for his New York apartment. ("I'd always wanted one," he says.)

The piracy, to my surprise, doesn't seem to bother him that much. "It may not be the officially sanctioned version," he says. "But they're both made in factories; they might as well be the same clock."

One detail of the knockoff does peeve him, though. In his original design, the transformer was housed in the clock's plastic case (you can see it to the left of the numbers in the photo above). The knockoff (below) moves it to a wall wart—one of those big hulking plugs. "That's why there's this dumb empty space and the numbers are off center for no reason," says Damon. "It's a stupid translation." 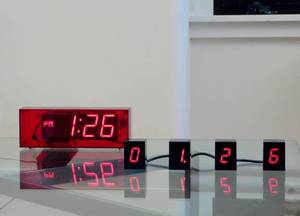 "Numbers," the newer clock, draws on the same vocabulary as the first—they share the same material (plastic) and the same underlying technology (LED)—but it arrives in a very different place. While "LED" is transparent—you can understand what it's made of and what makes it tick—"Numbers" is unapologetically opaque. "The cubes could be made of anything—painted metal, Japanese lacquer—you can't tell. There's a light that glows through them, but you don't see the components," says Damon. "There's something powerful about it when you don't know what's going on inside. It has a mystery which makes it more intriguing as an object."

And while "Numbers" may look modern, it gets there by way of the '70s, when electronics were more chunky, less slick. "We were deliberate in not making it feel iPod-y." The goal all along, he says, was "medium-tech."

There's a new version of "Numbers" coming out this summer, and it's an explicit blend of the first two. 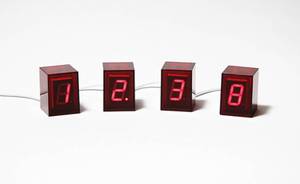 And to keep things interesting, Damon's newest clock, which he debuted a few weeks ago, takes things in a completely different direction: analog. 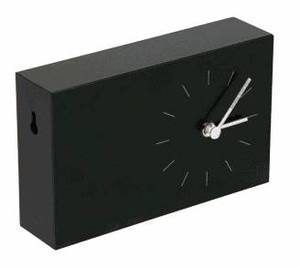