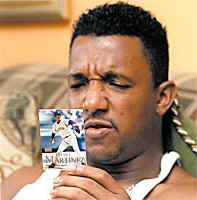 A younger, healthier Pedro Martinez marvels at his own amazing stats

Baseball stat-heads make a convincing case that the Pedro Martinez of 1997-2000 was the greatest pitcher in the game's history.  Against the supercharged offenses of the steroids era, Pedro dominated the way Bob Gibson had during modern-era baseball's weakest offensive phase, the 1960s.

In late 2001, Pedro was diagnosed with a partially torn rotator cuff.  Pitchers in these circumstances typically opt either to undergo surgery or to retire, but Pedro instead remade his delivery.  Formerly an over-the-top power pitcher, he transformed himself into a sidearm finesse pitcher--this to protect his shoulder.  The guy who threw 98 mph would never return, but his replacement, throwing 88 to 93 mph, continued to dominate Major League hitters for almost five more years.

Last October 5th, in pain and barely able to reach the mid 80s, Pedro finally underwent surgery on his torn rotator cuff.  In mid or late summer he will return to the Mets--but as what kind of pitcher?  What is the nature of the injury he suffered, how is it treated, and what is his prognosis?

For answers to these questions, GQ turned to Dr. Christopher Mazoué, a South Carolina-based orthopedic surgeon and a former protégé of the legendary Dr. James Andrews at the renowned American Sports Medicine Institute.

What is the rotator cuff, and what causes it to tear?

The shoulder joint, being a ball-and-socket joint, is inherently unstable.  The rotator cuff is a set of four muscles that surrounds the shoulder joint.  One of its functions is to provide stability.  Its other function is to produce motion of the shoulder.  We're still in the process of determining what exactly causes rotator-cuff tears, but in baseball players the primary cause is the tremendous stress put on the rotator-cuff muscles and the tendons attached to those muscles when they're throwing the baseball.

In a baseball pitcher, what are the symptoms of a rotator-cuff tear?

Classically we've referred to it as "dead-arm syndrome," basically meaning that you begin to lose velocity and lose control when you're pitching.  Pain is the most common symptom, however.  Incidentally, a very large majority of Major League Baseball pitchers have at least a partial tear.  It doesn't necessarily affect their performance.  You can have an asymptomatic pitcher with a partial-thickness rotator-cuff tear.

How is a rotator-cuff tear diagnosed?

An MRI with dye injected into the joint--it's called an MRI arthrogram--is becoming the study of choice to detect rotator-cuff tears.  We see two different types of injury:  partial-thickness tears and full-thickness tears.  Usually we will debride, or clean up, the torn part of the tendon.  And we make a determination on how deeply the rotator cuff is torn and where it's torn.  If its depth is greater than fifty percent, oftentimes we will repair the tendon.  If it's less than fifty percent, we will commonly just clean up the tendon and then treat any other injuries within the shoulder that we find.

How is a rotator-cuff tear repaired?

It's usually an arthroscopic procedure.  We make several small incisions and then place a small camera within the shoulder joint, then stitch together the tear using one of two techniques:  Either we convert a partial-thickness tear into a full-thickness tear, then anchor it in the bone with sutures, or we keep the attachments of the rotator cuff in place and just repair it through the tendon.

It sounds relatively non-invasive.  Why are eight months of rehab required?

Is there any merit to the claim of many scouts and coaches to the effect that pitchers with smaller frames, like Pedro--who's 5'11" and in his prime weighed less than 170 pounds--are particularly susceptible to injuries like this?

Common sense would suggest that there is a relationship between body size, the ability to throw at a high velocity, and the risk of injury, but there's not much scientific evidence for this.

Many post-operative Tommy John-surgery pitchers return throwing at least as hard as they've ever done, sometimes even harder.  Do we see a similar phenomenon with post-rotator-cuff surgery patients?

Yeah, the interesting thing about that is oftentimes the reason that they're throwing harder after surgery is because prior to surgery they weren't throwing as hard as they could--because they were injured.  Pedro Martinez traditionally throws 93 to 96 mph, but in the last couple years that's dropped down to 88, 90, because his injured rotator cuff wouldn't allow him to generate the forces to throw the ball as hard.  Once he recuperates from this injury, assuming he heals it correctly and he gets his strength back, there's a good chance that he'll regain the strength required to throw 95 mph.

Pedro changed his mechanics after he was first diagnosed with a partial-thickness tear back in late 2001.  To that point he'd thrown over the top; thenceforth he threw sidearm.  In his prime, throwing over the top, he'd regularly touched 97, 98 mph.  Is there a basis for thinking he might be able to reinstate that powerful over-the-top delivery?

He may not want to do that, because that seemingly produced a lot of discomfort in his shoulder.  It will be interesting to find out where he's going to position his shoulder when he returns to pitching.

It's been reported that pitchers who've had rotator-cuff surgery typically return to action after about eight months.  Pedro had his surgery on October 5th, which would suggest he'd be back no sooner than early June.  Is there a chance he might return sooner than that?

Oh, I think eight months is a short period of time.  A non-pitcher can get back sooner than that, but I would say that typically it takes eight months to a year, at least.

So it's possible we may not see Pedro at full strength until 2008?

Yeah, I think if he gets back in August or September, which they're predicting, it might be limited duty.  He may get back to full strength, but it's more likely that he won't have the durability and strength to return to the rotation until 2008.

What sort of durability do we see in guys who've had this surgery?  Will Pedro need to be mindful of this injury through the remainder of his career?

Well, we do know that he has injury already in his shoulder, and the tissues in the shoulder have a certain lifespan.  There's a very good chance that he will have a number of years left, assuming that he does well with his postoperative recovery.  But it's hard to say how many.