Sometimes, design simply doesn't work. Something goes awry between the time the drawings leave the designer's hands and the product finds its way onto store shelves.

Case in point: Polder's Z-Series Ironing Board, which won a "Design Distinction" award in I.D. magazine's annual design review last year and is pretty much the only stylish ironing board money can buy. It was designed by Scott Henderson, who's done great work for OXO (check out his dust pan and brush) and Mint. 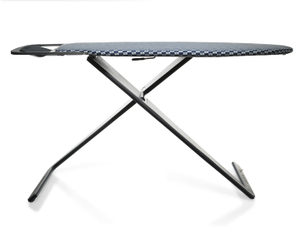 Besides its sleek looks, it boasts a fair number of functional enhancements. Forgoing creaky tubular legs for something L-shaped and flat gives the board an ultra-slim profile when folded and makes it easy to hang on a wall. Plus, it has a built-in outlet right under the board and a smartly placed rail for hanging your newly pressed shirts.

That said, the ironing board itself is ridiculously wobbly. Even when I stuffed about three inches of folded cardboard under one of the feet, it was still completely unstable.

I talked to Henderson briefly about it. The prototype he'd submitted to Polder didn't have that problem, he said, and he wasn't involved in how the product was ultimately realized. A rep at Polder told me that they're coming out with a new version of the ironing board with stabilizing rubber feet next month (Henderson wasn't consulted on the fix). If you were thinking of buying one, hold off until the new version comes out.

Similarly, I'd had my eye on Jasper Morrison's gorgeous kitchen appliances for Rowenta—a coffee maker, toaster, and water kettle—until Morrison mentioned to me that people had been e-mailing his office to complain that the electronics in the appliances were malfunctioning. 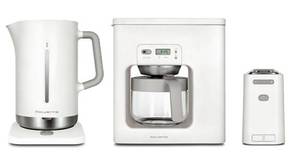 Morrison, of course, has no control over the electrical components inside these products, but he's since taken a proactive approach by putting a warning on his Web site: "Reports received on malfunctioning products. Buyers beware!" (The warnings are in red type and are the only use of color on his ultra-minimal site. They also have the site's only exclamation points, as well.)

As frustrating as it is for us consumers, I know these problems frustrate designers as well. It's a loss for everyone when a great design is just a step or two away from being realized.