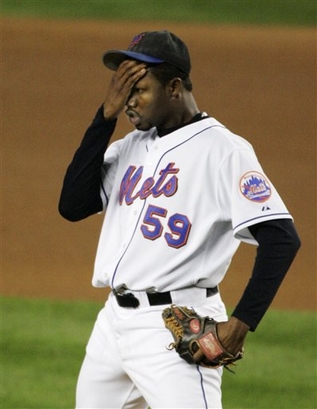 Guillermo Mota, who pitched in relief this year for the Mets, has failed a drug test and will be suspended for the first 50 games of the 2007 season.  To his credit, Mota's not issuing the sort of faux-bewildered denials we've lately become all too familiar with.

A more cynical take on the matter:  Mota is a free agent, which undoubtedly is shaping his response here.  With prospective employers watching him closely, he doesn't want to present himself as defiant or uncooperative.  To the extent that this is possible, he's trying to salvage his reputation.

We don't yet know whether the drug in question was a performance-enhancer.  For the record, Mota pitched poorly in the postseason, giving up 5 runs and 10 hits in 8.1 innings.  He was, however, excellent for the Mets during the regular season:  In 18 innings, he struck out 19 and allowed 2 runs, for an ERA of 1.00.

Update: The Associated Press is now confirming that Mota did in fact test positive for "a performance-enhancing substance."