The Photographs of David S. Allee

The November issue of GQ is, as many of you know, the All-Star Sports Issue. I don't follow sports (not even enough to have an opinion on the uniforms), so let me contribute to the conversation by sharing two photographs by David S. Allee: "Office Hoop" and "Garage Driving." Both are part of Allee's exhibition Cross Lands, which is on display at the Morgan Lehman Gallery in New York City. (Click on the images to enlarge them; they won't make as much sense when viewed at this smaller size.) 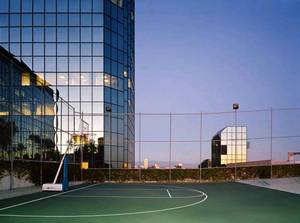 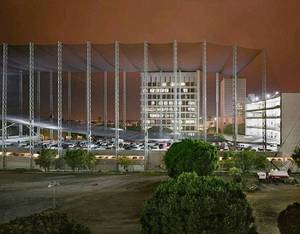 While glamorous sports images abound, Allee's photographs document the odd realities that result when shortsighted design (in this case, of our towns and cities) collides with our innate need for space to play. We end up in surreal situations: playing (half-court) basketball at unnaturally high altitudes, teeing off over concrete parking structures.

Even when their subjects aren't explicitly sporty, many of Allee's photographs suggest a squaring off between rival teams. In "Turnpike Condos," for instance, it's The Residential vs. The Industrial (you can almost see the line of scrimmage). 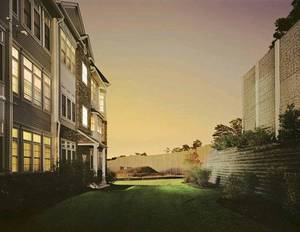 Allee was an urban planner for seven years before becoming a photographer, and he has an uncanny way of conveying a sense of overcrowdedness and congestion using landscapes that are utterly barren.

The series has other lovely contradictions, too. My favorite juxtaposition is "Big Box Retail," which shows a dense, somewhat wild patch of skylights (they almost look as though they sprouted from seed) with "Tree Farm," in which saplings are arranged in perfect rows, assembly-line style, along a roadside. The machine-made somehow looks organic; the organic looks machine-made. 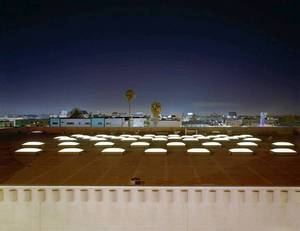 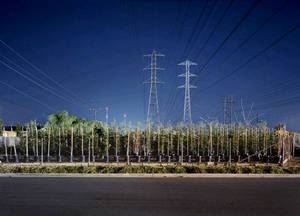 Cross Lands is on view until December 2. And although they don't do justice to Allee's large-format chromogenic prints (some are five feet wide), digitized versions are available on the gallery's Web site.