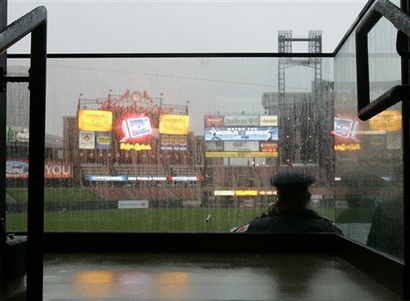 Last night's rainout helps Detroit, I think, if only because it doesn't help St. Louis. In the past decade, we have come to regard baseball as a game governed by percentages, which in a broad sense it is. But teams can catch fire in the postseason (think of Boston and Chicago winning eight in a row in 2004 and 2005, respectively). In limited sample sizes—and what else is the postseason if not a limited sample size?—you can't disregard the element of momentum.

The Tigers won seven games in a row in this postseason, only to have to endure a week-long layoff when the NLCS went seven games and was delayed by two rainouts. Having averaged more than 5 runs per game in the ALDS and ALCS, they have now scored a total of 5 runs in the first three games of the World Series. Detroit had the fourth-worst on-base percentage in all of baseball this year, so they're all about momentum.

The Cardinals began the World Series two days after their dramatic (for Cardinals fans) Game 7 victory over the Mets. They've now won two of the first three games, with the next two to be played in St. Louis. They're gathering speed, so if you're a Tigers fan, you should be happy about last night's rainout and hoping for one tonight, too.