While in Stockholm, I met up with Anna Lindgren, a member of the four-woman design team called Front (which the Swedes pronounce froont). Here she is on the terrace of the Hotel Rival: 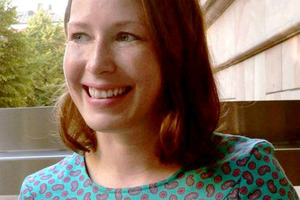 She and her design partners met while studying at Konstfack, Stockholm's premier design school. The other members of Front are Sofia Lagerkvist, Katja Sävström, and Charlotte von der Lancken. 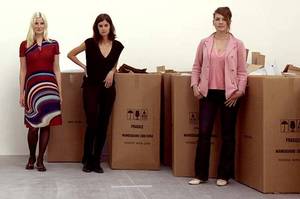 Front has been generating a lot of buzz lately, not because (as some of you might be thinking) it's comprised of four twenty-something Swedish women, but because they take such a lovely route to get where they're going: their process can be just as interesting as the objects they create.

The decorative element of their modestly named "Insect Table," for example, is based on the paths taken by live beetles meandering across its surface: 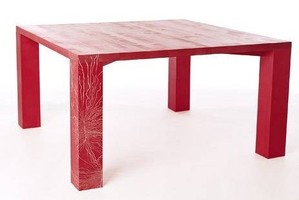 The table is part of a series called "Design by Animals," for which Front enlisted a motley assortment of critters (a snake, a rabbit, a rat, a fly, a dog) to play an integral part of the design process. (As Anna explains, every design project is influenced by random factors; their use of wild animals was an attempt to enhance that randomness.)

Taking the animal theme to new heights, Front introduced a floor lamp (of sorts) for the forward-thinking Dutch design company moooi this year. It's basically a life-sized cast of a horse with a lampshade on its head. 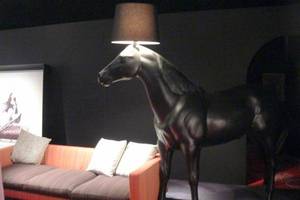 According to Anna, Front was given a simple brief by moooi's art director, Marcel Wanders: create a lamp "that your grandmother would like." This is what they came up with. (For an earlier project, Front had interviewed people all over Stockholm about their favorite objects, and figurines consistently topped the list.) The preposterousness of their proposal is not lost on them; they admit the line is "furniture to fall in love with at first sight, or hate forever."

Front's designs range from mass-produced objects for the home to one-off art pieces aimed at galleries—and sometimes a combination of the two. They made interesting use of everyday objects in their interior for the Tensta Konsthall, an art gallery on the outskirts of Stockholm.

In the gallery's coat room, Front unleashed a ridiculous number of generic, self-adhesive plastic hooks and invite visitors to stick more up wherever they see fit. The result: an object that you usually don't notice becomes one that you can't ignore. 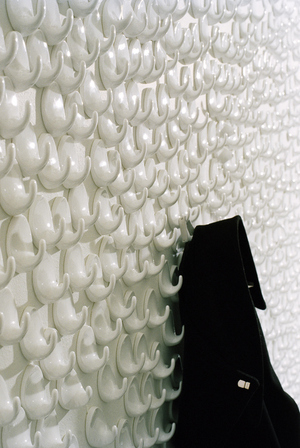 In a similar vein, all of the seating in the gallery is derived from the anonymous, ubiquitous lawn chairs sold in hardware stores everywhere. Front upholstered the chairs in leather and, for the office, added wheels to wring novelty from the everyday. (The leather version is available from vlaemesch() and is sold under the name "Leather and Plastic Chair.") 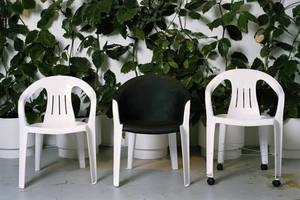 My favorite, though, is the seemingly non-descript mug they created for the gallery cafe. Where you usually find a funny saying or a rainbow, Front imprinted an image of the gallery space reflected in the mug itself: 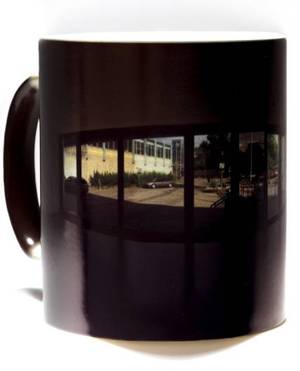 On a slightly less heady level, Front has designed some nice home goods for Materia, including "Bin," a wastebasket that changes shape as it gets filled. (I mention to Anna that I'd read that the inspiration for Bin came from the trashcan icon on Macintosh computers; she says she read it, too, and that it is untrue. She wonders herself where this story came from.)

There's also "Peg," their contribution to the world of plastic, self-adhesive wall hooks. 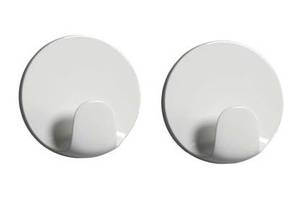 Like many industrial designers, Anna has a fascination with mass production. (When I called her earlier in the week, she was at Ikea was shopping for officey stuff.) She points out: Even though mass-produced objects are made to be exactly alike, they never look the same once they leave the store—maybe they end up being used for an unintended purpose; maybe they're broken; they all wear in different ways. As a result, an object that is generic becomes, through use, unique.

With this in mind, Anna hopes people will find ways to use the wall hook, which is intentionally unremarkable, in a way that makes it their own.