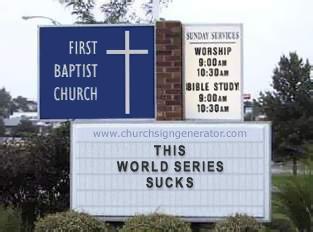 Virtually every time St. Louis tested Detroit in this World Series--by putting men on base with two outs, by hitting double-play balls, by lofting the ball into the gap late in games--Detroit collapsed.  In Game 5, Jeff Weaver left a lot of floaty stuff over the plate; not once did the Tigers seize the advantage.  That's what made this such a crappy championship.  We saw neither team pushed to its limit.

During the on-field interviews following Game 5, various Cardinal players and execs remarked that no one had believed in their team this year.  To say this while standing in front of 50,000 of baseball's most steadfast and forgiving fans, as Albert Pujols did, struck me as strangely ungrateful.  But Pujols' comments were beside the point, because Detroit gave away this World Series.  In all, the Tigers allowed eight unearned runs, essentially spotting the Cardinals nearly two runs in every game.

Granted, I watched the games mostly with the volume muted, but not once did I hear Fox's broadcast team pose this provocative question:  What has happened to Ivan Rodriguez?  In this World Series, he was decidedly, as they say, "a non factor."  Is there a power hitter more diminished since baseball's institution of tougher drug-testing standards?  Between 1999 and 2002, I-Rod averaged 26 home runs (including 27 in only 91 games in 2000); in the four years since, he's averaged 15.

This offseason, Detroit's looking for offense, of course, and will reportedly put Jeremy Bonderman, who's only 24 and an ace in the making, on the market.  The Tigers want to acquire A-grade prospects to succeed Rodriguez at catcher and Guillen (who will be an expensive free agent after 2007) at shortstop.